In JFK’s day this was regarded, by men and women alike, as inevitable, permissible, and no one’s business, at least among wealthy white males. Kennedy came to the White House in 1960 exercising the droit de seigneur of the French aristocratic court. The king could have any woman he pleased and she should be pleased to be gotten. We can be sure that JFK spoke often of grabbing them by the you know what.

After a couple of sexual revolutions, driven by feminism and gay pride, alpha males are not so insulated from social pressure and female rebuke. What was once accepted, no longer is. The rules have changed. President’s Trump’s treatment of women in the White House will get closer scrutiny than JFK’s. First Lady Melania will see to that.

The Politics of JFK

My friend Marie Fonzi said she was sorry I took this blog took a position in the presidential election. Me too. In an election year, with a lot at stake, I tried to separate the mission of the blog and my personal political opinions. At the end, partisan passion may have gotten the better of me. But this is my blog, so I expressed myself. Forgive me.

Now the voters have spoken. I respect the results and the views of my friends and readers (and brother) who favored Trump.

That’s my only consolation on this dismal day. On the issues that motivate this blog, President Trump might be good. I’m not talking about “a silver lining” to Trump’s victory. There is none.

I’m talking about what happens in October 2017 when all JFK assassination records are scheduled to be declassified in their entirety.

Trump’s record on the JFK story includes the usual dosage of hateful BS.

Trump smeared his rival Ted Cruz with a baseless JFK conspiracy theory. Trump insinuated, based on a lightly-sourced story in the National Enquirer, that Cruz’s father had something to do with patsy/lone gunman Lee Harvey Oswald. There was no evidence to support his claim. 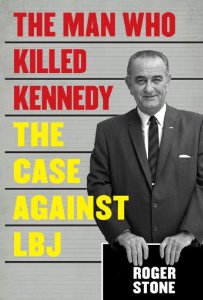 Trump’s adviser Roger Stone is often described critically as a “JFK conspiracy theorist.” I always thought Stone’s views should be taken seriously, if only because he was the rare JFK author who had actually worked in the White House. As a hard-right political consultant, Stone bonded with dirty trickster President Richard Nixon in the 1970s.

Stone believes that President Lyndon Johnson was responsible for JFK’s murder, which is unproven but not so implausible as I once supposed. When I met him for a meal a few years ago, the impeccably coifed Stone used his “LBJ done it”  conspiracy theory as a cudgel to batter Lyndon Johnson and belittle liberalism in general.

Stone is a power player, not a scholar. He understands, the JFK assassination myth as a tool, as a way to address a broad American audience, as a way to establish populist credibility and undermine liberal authority.

Mainstream news commentators sniff at his tactics but he has a point. And now he may well get an office in the White House.

What will Roger Stone advise President Trump to do when it comes to full JFK disclosure in October 2017?

Will Trump be like Hillary Clinton and reflexively support the national security agencies? Or will he do the right thing?

I don’t know but I will repeat myself:  If I had been voting solely for the purposes of advancing full JFK disclosure in October 2017, I would have voted Trump, not Clinton.