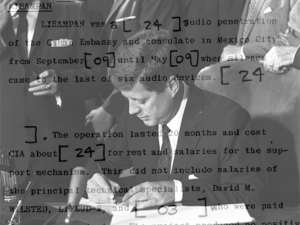 After 53 years, continued JFK secrecy would provoke unnecessary suspicion and flout Congress’s clear preference for full disclosure within 25 years. And it would deny the American people access to portions of our history.

What’s in the files?

Most researchers believe it is unlikely that the last JFK files contain any kind of proverbial “smoking gun” proof of a conspiracy. Based on what is known about these records from the JFK records data base, they will shed new light on many JFK-related issues including:

–U.S. assassination operations run by senior CIA officers, Bill Harvey and David Phillips, who were known for their disdain of JFK’s policies;

–the monitoring of Lee Harvey Oswald between 1959 and 1963 by counterintelligence chief James Angleton as well as Angleton’s still-secret testimony to the Church Committee which investigated the CIA abuses of power.

—Heavily redacted passages from FBI investigation of the handling of Oswald’s return to the United States in1962-63.

–At least twenty six documents generated by the Church Committee.