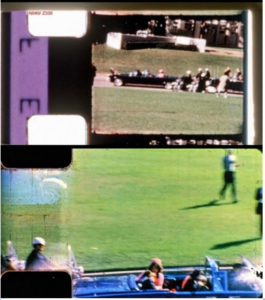 On November 22, 1963, two bystanders, Orville Nix and Abraham Zapruder, filmed the presidential motorcade in Dealey Plaza. They both captured the same moment after Kennedy was shot: Nix from afar (top) and Zapruder from close-up (bottom).

The original version of Orville Nix’s film was seized by government agent and vanished. The only extant version is a copy that was later returned to Nix.

Parallax is defined as “a displacement or difference in the apparent position of an object viewed along two different lines of sight.”

The Parallax View is the name of one of the best JFK-inspired Hollywood movies, starring Warren Beatty as a reporter who asks too many questions.

1 thought on “JFK: The Parallax View”