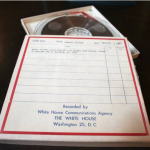 A recording of radio communications to and from Air Force One on November 22,1963, discovered in 2011, is among the most important new pieces of JFK evidence to emerge in recent years,

The tape, an edited excerpt from a longer recording, captures some of the communications of the leaders of U.S. national security agencies as they learned about the assassination of a sitting president.

I wrote about the importance of the Air Force One tape in the fall of 2013:

You can listen to it here.

Where was the Air Force One tape found?

This old-fashioned reel of analog tape surfaced at Philadelphia auction house in 2011. The recording was found in the estate of the family of Gen. Chester Clifton, a military aide to JFK. Clifton died in 1991. His children put the estate up for auction.

When was the tape first made public?

Kelly’s I wrote about the significance of the Air Force One tapes in piece published in the Oct. 27, 2013, print edition of the Dallas Morning News.

The Detroit Free Press, USA Today, and CNN picked up on the story of the tapes.

Why is the Air Force One tape important?

The tapes capture a fascinating and tragic moment in  American history.

Listen to the tape (parts 1,2 3, and 4) as cleaned up and transcribed by Bill Kelly and Ed Primeau with a running transcript and visuals from Primeau Productions.

Read Kelly’s summary of what we know about the missing portions of Air Force One tapes.

COME BACK TOMORROW FOR JFK STORY #16: A close friend of Jack Ruby’s says he had “no choice” but to kill Lee Harvey Oswald

OR BUY HIS EBOOK, CIA & JFK