Deprecated: Function Elementor\DB::is_built_with_elementor is deprecated since version 3.2.0! Use Plugin::$instance->documents->get( $post_id )->is_built_with_elementor() instead. in /home/cnw9flf6e/public_html/wp-includes/functions.php on line 5379
 An inside look at the Cuba's war with the CIA > JFK Facts Skip to content

Here’s a powerful piece of journalism by the late Gaeton Fonzi, rescued from the Memory Hole of American history by the Mary Ferrell Foundation. It is a twenty year old essay that couldn’t be more timely in 2016. As the United States and Cuba attempt to reconcile after fifty years of violent conflict, Fonzi’s reportage explains why the process is so difficult and so necessary.

Fonzi, a journalist and congressional investigator, went to to Havana in 1995, to interview Fabian Escalante, a senior retired Cuban intelligence officer for Esquire magazine. The result was, “And Why, by the way is Fidel Castro Still Alive?”  a sympathetic and penetrating profile of Escalante and the Cuban intelligence service’s war with the CIA

Escalante explains the techniques and doctrine that enabled the Cuban leader to survive literally hundreds of murder conspiracies, mounted by CIA assets and officers. He also evokes the passion and popularity of Cuban nationalism which fortified Castro’s personal safety and his one-party socialist state. The piece explains better than any piece of journalism out of Cuba in recent years why Castro, now frail and retired, is still very much alive.

In his talks with Fonzi, Escalante emphasized that Cubans were never “anti-American,” even when U.S. sailors urinated on a statue of Jose Marti. The Cubans, he said, were opposed to U.S. policies, which included economic embargo, rejection of diplomacy, and assassination for five decades.

Escalante describes how Cuba resisted and thwarted Washington’s bipartisan, extra-legal policy of violence (objectively it could be described as “terrorism”) over the course of many years. Fonzi differed with Escalante’s assessment of Castro’s domestic political enemies but he didn’t dispute the essential justice of the Cuban position toward the CIA.

Today, as the government of President Raul Castro begins to normalize relations with the United States, the legacy of the two country’s sometimes violent relationship is still felt. With Fonzi’s essay, Americans can better understand how Cubans understand our common history. 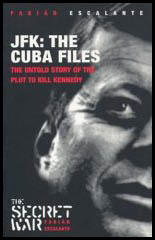 Esquire declined to publish Fonzi’s piece–because it was “too honest, too sympathetic to the Cuban side,” Fonzi suspected.

After Fonzi died in 2012, his widow Marie Fonzi found the essay in his files. She has donated it (along with audio files and transcripts) to the Mary Ferrell Foundation.

In her introduction to the essay Marie Fonzi notes what brought the two men together was an interest in the assassination of JFK. At the end of his book The Secret War, Escalante wrote:

“The year 1963 brought with it new battles which constantly hardened the Cuban people in the struggle. From very early on that year, more attempts on the life of Fidel Castro were in preparation, not to mention the most surprising conspiracy of all — the assassination of President John F. Kennedy – in which it appears that the same minds did the planning and the same hands pulled the trigger.”

This conviction, shared by Fonzi and Escalante, probably played a role in Esquire’s decision not to publish Fonzi’s piece. Escalante had articulated a thought so disturbing that otherwise intelligent journalists, preferred not just to ignore but to prevent its publication in the hopes the thought would go away.

Gaeton Fonzi, to his everlasting credit, made sure it wouldn’t.

Read it here:  “And Why, By the Way is Fidel Castro Still Alive?”