Deprecated: Function Elementor\DB::is_built_with_elementor is deprecated since version 3.2.0! Use Plugin::$instance->documents->get( $post_id )->is_built_with_elementor() instead. in /home/cnw9flf6e/public_html/wp-includes/functions.php on line 5379
 The first online tour of the CIA's abstract art collection > JFK Facts Skip to content 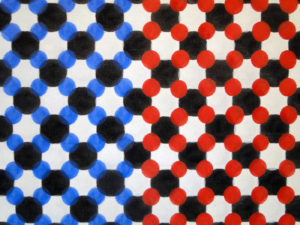 A reminder that, conspiracy theories aside, the CIA does seek to embody and shape the American culture to advance its secret intelligence mission.

“It’s more politically significant than it appears,” says Hyperallergic, “and there are still unanswered questions.”

In 1968, notorious art collector Vincent Melzac — who was also a catfish farm owner, salon chain magnate, Arabian race horse breeder, and former Corcoran Gallery chief — loaned a series of abstract paintings to the CIA. All were by artists affiliated with the Washington Color School, a post-war movement based in DC, known for their stripes, polka dots, and color fields on canvas.

The article is rightly dismissive of the unfounded conspiracy theory that Mary Pinchot Meyer, a painter in the Washington Color School and lover of President Kennedy, was murdered by the CIA.

The evidence for this theory, offered in the latest edition of Peter Janney’s book Mary’s Mosaic, is weak and speculative at best.

This pro-American aesthetic is what makes the Melzac Collection blend in with the rest of the agency headquarters’ self-referential decor. Most of this decor is, of course, patriotic, often to the point of self-parody. It’s also full of dissonant juxtapositions. In the glass atrium of the New Headquarters Building, black models of CIA aircraft hang from the ceiling like ominous mobiles. In a nearby corridor, a lacquered lavender poster features a quote from Thich Naht Hahn, a Buddhist monk famous for his peace activism during the Vietnam War.

Source: A Visit to the CIA’s “Secret” Abstract Art Collection