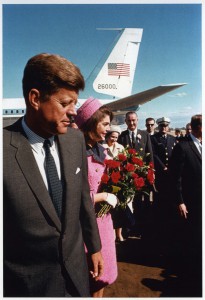 From the fever swamp of InfoWars, Jerome Corsi reports that “JFK researchers” are saying that President Donald Trump is at risk for assassination because of his differences with the Central Intelligence Agency.

I have been a JFK researcher for 35 years, and Corsi has distorted what most of us think to serve a fear-mongering political agenda.

“JFK researchers: Trump at risk for assassination” is a lousy piece of journalism, less of a story than a conspiratorial meme but it is revealing about Trump and the CIA.

Origins of the Story

At a Sunshine Week conference on JFK assassination records, held at the National Press Club in Washington D.C. on March 16, attorney Larry Schnapf made the case that the assassination of President John F. Kennedy is still a crucial story in American political life.

Schnapf has a point. “The Invisible Government,” a best-seller written while JFK was still alive and published in 1964 after his death, was an early statement of the “deep state” concept now debated by pundits from Remnick to Greenwald to Gingrich.

Trump used a bogus JFK theory to defeat rival Ted Cruz. We flock to movies about Jackie Kennedy and LBJ,  And people across the left-right political spectrum about the unchecked powers of the CIA. The contemporary relevance of JFK is unmistakable.

In his remarks, Schnapf likened President Trump’s differences with the CIA to Kennedy’s and speculated they could provoke a deadly response.

“Donald Trump must understand the threat to his life from enemies within the Deep State is real,” Schnapf said.

Schnapf was extrapolating from  a common suspicion about JFK’s death. President Kennedy, a pro-civil rights, pro-peace president, was assassinated under enigmatic circumstances in Dallas on November 22, 1963.

The belief that CIA personnel were involved in JFK’s death is not proven. Nor is it unfounded, as my forthcoming biography of legendary spook James Jesus Angleton will show.

But it is a stretch for Schnapf to say Trump’s faces a greater threat of assassination as a result of his CIA outbursts. It is an even bigger stretch for Corsi to conclude that Schnapf’s views are the “consensus” of JFK researchers. They aren’t.
Trump v. CIA

Historically speaking, there’s a big difference between Trump and JFK’s relationships with the CIA.

Over the last six months, Trump has had a series of verbal skirmishes with unnamed former agency officials (but surely including pro-Clinton former CIA directors John Brennan and Mike Morrell). He has made clear his disdain for the CIA and its analytical work.

This can be seen as a “Deep State” power struggle. It could also wind up being just another Washington turf war.

With its $15 billion a year budget and 20,000-plus employees, the CIA is an independent power center in the nation’s capital. The agency is institutionally resistant to Trump’s agenda, because adviser Steve Bannon seeks to dismantle America’s traditional international alliances. The CIA has played a leading role in those alliances since 1947. Naturally, the agency opposes radical change.

Trump’s actual policy differences with the CIA are hard to discern. The president advocates torture via waterboarding, which the CIA has renounced. He has reportedly loosened restrictions on CIA drone strikes. Neither move seems unfriendly to Langley’s interests. We don’t know anything about what Trump is actually proposing for the CIA’s FY 2018 budget.

As Professor Michael Glennon said in an interview with AlterNet, it is possible that Trump will make peace with the most secretive sectors of America’s “double government.”

By contrast, President Kennedy had sustained, substantive, and largely private differences with the Agency.

From 1961 to 1963, JFK deployed the agency to wage covert war from Cuba to Berlin to Laos; to photograph Soviet nuclear installations; and to support the growing U.S. military mission in Vietnam.

Kennedy, while often supportive of the agency, broke with the CIA and Pentagon during the Cuban missile crisis of October 1962. Over vehement objections from his generals, JFK refused to invade the island and destroy Fidel Castro’s communist government. He improvised and imposed a peaceful solution–and won a huge increase in popularity.

This confrontation shaped the rest of JFK’s presidency. In early 1963, Kennedy effectively thwarted the plans of the CIA and the Joint Chiefs of Staff to provoke an invasion of Cuba. In his famous American University speech of June 1963 JFK promoted peace with the Soviet empire. In the fall of 1963 he privately discussed reconciliation with Cuba. He was cruising toward re-election. And then he was shot dead.

In short, JFK’s clash with the CIA was about policy and it was profound. Trump’s is neither–at least not yet.

In any case, Corsi’s idle headline about assassination of a sitting president is irresponsible, especially in a country with as many guns and mentally ill people as the United States. InfoWars should retire this meme.

“It’s time to release them all,” said Tunheim, the former chair of an independent panel that declassified thousands of JFK records in the 1990s.

The National Archives retains a trove of more than 3,500 JFK assassination records that have never been seen by the public.

The records are historically significant.

They also include CIA files of senior undercover officers such as Bill Harvey, David Phillips, and Howard Hunt. All three believed Kennedy’s policies were dangerously weak, perhaps even treasonous.

In his Press Club comments, Tunheim, the senior federal judge in Minnesota, noted that President Trump and White House General Counsel Donald McGahn face important decisions about these records. The leadership of the CIA, including director Mike Pompeo, may prefer that some of this material remain secret.

What’s in the JFK files?

Historians, journalists, and researchers differ on what might be found in the last of the government’s JFK files. In 2015 Politico’s Bryan Bender expressed common view that the files could embarrass the CIA in multiple ways.

In my opinion, these JFK files almost certainly do not contain a “smoking gun” proof of a conspiracy to kill JFK. But they probably do contain evidence of CIA manipulation of accused assassin Lee Harvey Oswald before and after JFK was killed. And legendary counterintelligence chief James Angleton was probably involved in this manipulation.

We won’t know for sure until October.

In an email to JFK Facts, Corsi said that he had brought his article to the attention of unnamed “White House aides,” adding “Trump is sympathetic to getting all JFK records released.”

If President Trump orders the release of all of these records, he will be doing a public service long advocated by JFK researchers.