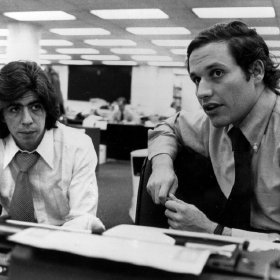 Pakula had Goldman’s script in hand. But the obsessive filmmaker desperately wanted more detail and color about key events as well as a complete change of tone in the screenplay. So in February 1975, he sat down with Woodward (then 32 years old) and Bernstein (then 31) for the first of several sessions, taping their recollections for reference.

Approximately eight total hours of conversation resulted and there is a single-spaced, 75-page transcript filed among Pakula’s papers at the Academy of Motion Picture Arts & Sciences in Los Angeles. The “Woodstein Tapes” will be vital to any historian who contemplates writing a new history of Watergate, because they contravene what we think we know and will help force a revision of the conventional story.

1 thought on “The Woodstein Tapes”