Deprecated: Function Elementor\DB::is_built_with_elementor is deprecated since version 3.2.0! Use Plugin::$instance->documents->get( $post_id )->is_built_with_elementor() instead. in /home/cnw9flf6e/public_html/wp-includes/functions.php on line 5379
 The Watergate burglar and a CIA operation to deflect Cuba's allegations about JFK's assassination > JFK Facts Skip to content 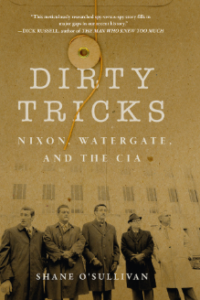 In his new book, Dirty Tricks: Nixon, Watergate and the CIA, Shane O’Sullivan lays bare a scandalously under-covered story: the role of CIA personnel in the Watergate scandal and its aftermath.

In an excerpt for the Washington Post, O’Sullivan tells an intriguing tale about Watergate burglar Rolando Martinez, the CIA operative who was pardoned by President Reagan in 1984. Antonio Veciana, the CIA operative who says he saw Lee Harvey Oswald with David Phillips two months before JFK was killed, has an interesting role in the story.

O’Sullivan’s story doesn’t directly bear on the JFK story but it does show that Veciana was a trusted agency operative through the 1970s.

With Veciana’s help, Rodrigues helped mount an operation against Cuba to deflect Fidel Castro’s allegations that the CIA was involved in JFK’s assassination.

Only those closest to Martínez in intelligence circles knew the role his secret mission to Cuba had played in Reagan’s decision to grant clemency. And Martínez’s mission had an intriguing subplot that threatened the CIA’s very existence at the time. The agency initially suspected that the Cuban pitch to Martínez was part of a broader propaganda campaign to implicate the CIA in the assassination of President John F. Kennedy and further damage its morale and reputation after a series of scandals.

O’Sullivan’s book is well worth reading because it illuminates the milieu in which both JFK’s assassination and the Watergate burglary took place, the milieu of CIA covert operations.

Source: The Cuban spy and Watergate burglar who won a presidential pardon – The Washington Post