I’ll be talking at Boston University on Monday evening, December 4, about CIA spymaster James Angleton, founding father of the Deep State. The event is free and open to the public.

I’ll sketch what the new JFK files tell us about Angleton’s role in the events of 1963. I’ll bring to life one of the most powerful unelected officials ever to serve in the U.S. government. And I’ll sell you a book if you want to know more. 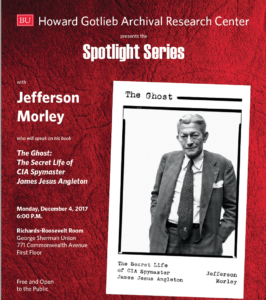 I’ll talk about a key discovery I made in BU’s Howard Gotlieb Archival Research Center, which illuminates Angleton’s previously unknown attitude toward toward a gay colleague and rival.

The event take place at 6 p.m. in the RIchards-Roosevelt Room of the George Sherman Union, 771 Commonwealth Avenue, First Floor.