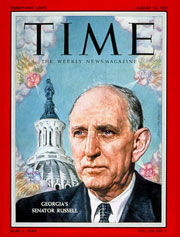 Speaking of “Six insiders who suspected a JFK plot,”

Len Osanic’s Black Op Radio drills down on the story of Insider #4, Georgia Senator Richard Russell, a conservative defender of racial segregation and a member of the Warren Commission.

Russell’s biographer dubbed him “the first dissenter” in the  JFK assassination story.