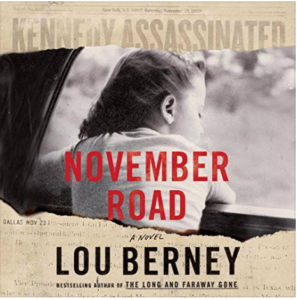 I mentioned Lou Berney’s JFK novel November Road the other day, not knowing that this is a Big Book, at least in the publishing world.

It tells of an Oklahoma woman on the run from her husband, an underling to New Orleans-based mobster Carlos Marcello, who is trying to make himself vanish in the wake of President John F. Kennedy’s assassination. They’re both heading West, and encounter each other in Las Vegas, where JFK was known to spend some free time.