I think the History Channel needs to hear from more people about “JFK Declassified.” Here’s what you can do. 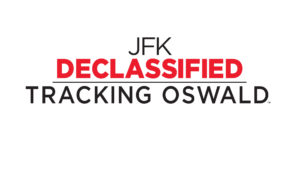 I don’t want to protest the show’s apparent cancellation. I was not a fan of the two episodes that aired. As I told host Bob Baer on WIOD Miami talk radio, the show’s findings were not new, and its approach–avoiding scrutiny of the CIA–lacked balance.

But for a major media organization to cancel a big-budget investigation of the JFK story without explanation is more than curious. It is extraordinary. As in extra-ordinary.

The issue is how the JFK story gets told in 2017: Who or what, changed the History Channel’s well-laid plans to revive the “Castro Done It” conspiracy theory?

On the centenary of JFK’s birth and the 25th anniversary of the JFK Records Act, this question deserves an answer now:

Or send them an email: support@history.zendesk.com. Put the ID # 251154 in the subject line. (That’s the tracking number for my first query and will signal you are asking about JFK.)

And report back what you find out.