Dorothy Kilgallen, perhaps the most famous female journalist in American in the the early in 1960s, died under mysterious circumstances as she investigated the assassination of JFK. 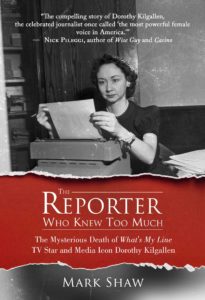 Mark Shaw’s book about has been optioned by two Hollywood producers.

John Erick Dowdle and Drew Dowdle are developing a project about columnist Dorothy Kilgallen, whose own investigation into the assassination of John F Kennedy criticised the findings of the Warren Report.