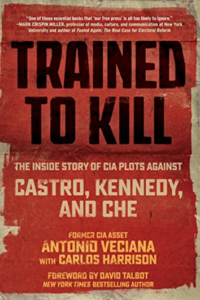 Hardway’s argument is reasonable–it might be true; Veciana may not have told us all he knows–but I’m not convinced that it definitely is true. Hardway’s intriguing theory requires more investigation.

Parnell’s argument is strained and self-righteous, complete with leading questions designed to deliver the reader into his conclusions. His theory requires no further investigation because he’s right, and if you disagree you’re a probably another pathetic “conspiracy theorist.”

In Parnell’s account Veciana is some guy who who made up a bunch of stories for no reason, one of which Gaeton Fonzi, allegedly a crazed conspiracy theorist, used to sell his own stupid conspiracy theory.

This cartoonish account is unfair to Fonzi who was a professional journalist and investigator, respected in his work, careful in his methods and open-minded in his thinking. Fonzi’s unlikely friendship with the young Bill O’Reilly attests to his generous personality. To caricature him as a “conspiracy theorist” doesn’t just ring false. It is false.

Parnell accuses me of a lack of critical thinking. But I think my review has a rather more rounded and detailed account of who Veciana was, something that Parnell, in his furious anti-conspiratorial preacher mode, never gets around to doing.

Who was Antonio Veciana, if he was not the man he says he was? Did he work for Che Guevara? (Yes.) Did he burn down the department story El Encanto? (He did.) Did he run Alpha 66? (Yes.) Was he identified as AMSHALE-1 in CIA files (Yes.) Did his cousin Guillermo Ruiz work for Cuban intelligence (Yes.) Was Veciana deeply involved in Cuban operations for more than a decade (Yes.) Who was his case officer, if it wasn’t David Phillip a.k.a “Maurice Bishop?”

Parnell has few answers for such questions because he’s actually not that interested in the history of the Cuban-American struggle for power. Like a lot of people, he’s more interested in conspiracy theories, than in facts.

For all his self-proclaimed expertise, Parnell’s knowledge base seems thin. What of Veciana’s account of how Alpha 66 was organized and run? What about Veciana’s divisive decision to bring leftist Eloy Gutierrez Menoyo into his movement? What about the testimony of CIA contract officer Ross Crozier who told Gaeton Fonzi (and then me) that Phillips did use the alias “Maurice Bishop?”

Such questions don’t delay Parnell from arriving at his anti-conspiratorial destination, . As a result, Parnell’s Veciana looks like more of a straw man, than a real man, which is why I found his arguments unconvincing.

Parnell is right about one thing. Wynne Johnson’s story is worthless as evidence.