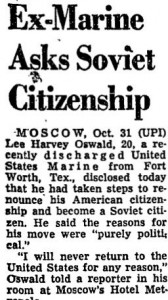 The mail surveillance of Lee Harvey Oswald was ordered by counterintelligence chief James Angleton in November 1959, not long after the Washington Post reported the news that a 20-year-old Marine had defected to Moscow.

The 1975 Senate memo documents when a number of Americans were put on Angleton’s “watch list.” The list consisted of persons whose overseas mail was to be intercepted, copied, and filed by the CIA. This mass mail surveillance program was known by the code name of HT/LINGUAL.

(Note that this document is not dated with the American-style month/day/year format but with the European-style day/month/year format.) 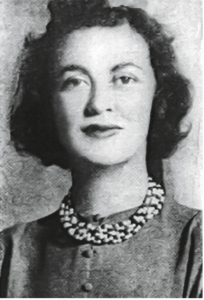 Betty Egerter, aide to James Angleton. She controlled the CIA’s Oswald file from 1959 to 1963.

Angleton ran LINGUAL. In the late 1950s, the brillant, Yale-educated Angleton was one of the most powerful and feared men in the CIA. With responsibility for disrupting KGB operations in America, he naturally had a deep interest in the two dozen U.S. servicemen who defected to the Soviet Union or other communist countries in the late 1950s and early 1960s.

Angleton’s staff continued to receive State Department reports on Oswald, and on August 7, 1961, Oswald’s name was put back on the LINGUAL watch list. Angleton’s aide, Betty Egerter, kept track of the names on the list.

(See below for the declassified CIA note card below that memorialized Egerter’s role in the surveillance of Oswald.)

Oswald’s name was removed from the LINGUAL watch list for a second time on May 28, 1962. That’s when Angleton’s staff learned from the State Department  that the former Marine was returning to the United States with his Russian wife, Marina.

Angleton did not lose track of Oswald after his return, nor lose interest, according to declassified records. On June 22, 1962, the LINGUAL intercept team sent a newspaper clipping about Oswald’s return to Texas to Angleton’s office.

“This item will be of interest to Mrs. Egerter, CI/SIG,” the memo states.

This declassified CIA routing slip shows how the August 1962 FBI interview of Oswald was passed to two offices in Angleton’s domain: the Special Investigations Group (CI/SIG) where Egerter worked, and the Operations office (CI/OPS). 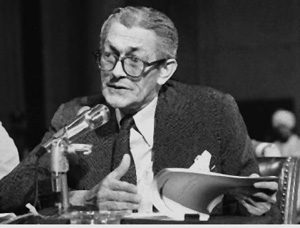 Over the course of the next year, Oswald came to the attention of other CIA intelligence collection programs. Not coincidentally, these programs are still shrouded in official secrecy an incredible 55 years later.

Case in point: the AMSPELL files.

In August 1963, members of the anti-Castro, CIA-funded Cuban Student Directorate (code name AMSPELL) had series of encounters with Oswald in New Orleans. They confronted him about his pro-Castro politics. They debated him on a New Orleans radio program. They denounced him publicly.

The AMSPELL program is still a top secret issue for the CIA a half century later. In December, the National Archives reported the agency had released 75 pages from the AMSPELL file. Not quite. In fact, 60 of the pages are still redacted.

The records of George Joannides, the deceased CIA case officer who “guided and monitored” the AMSPELL program in August 1963, are also top secret, according to the CIA.

Are these files relevant to JFK’s assassination?

The CIA says no. Next month, lawyers working for Attorney General Jeff Sessions will argue in federal court that there has been–and will be–no “public benefit” from information forced into the public record by my FOIA lawsuit.

The government’s message in 2018 is clear: There is nothing to be gained from looking twice–or even once–at the Joannides and AMSPELL files from 1963.

Here’s what the new JFK files tell us.

Oswald left New Orleans in September 1963 and travelled by bus to Mexico City–where he triggered another sensitive CIA surveillance program, known by the code name LIENVOY. It happened when Oswald visited the Cuban Consulate and unsuccessfully applied for a visa to travel to the island.

Once again, the details are still top-secret. If you consult the National Archives database of JFK assassination records, you will find at least 18 files tagged with the key words “Oswald” and “Mexico City Trip.”

Conspiracy theories notwithstanding, the surveillance of Oswald remains a sensitive issue in 2018.

CIA historian David Robarge and some JFK researchers dispute the notion that Oswald was under “surveillance” before JFK was killed.

They downplay the significance of the agency’s pre-assassination interest in Oswald. The unassuming but dangerous ex-Marine, they say, was only surveilled accidentally or coincidentally. There was neither rhyme nor reason to the CIA’s attention to him. No one, they say, connected the proverbial dots.

Yet the reporting on Oswald by various CIA collection programs between 1959 and 1963 was not randomly distributed among CIA components that failed to communicate with each other,

In fact, the new JFK files show that virtually all U.S. intelligence reports on Oswald–from State, FBI, or the Navy–were funneled to the same bureaucratic destination: CI/SIG, the Special Investigations Group of the Counterintelligence.

The CI/SIG office was right down the hall from Angleton’s suite on the second floor of CIA headquarters.

If the Oswald dots were not connected, the Counterintelligence Staff is where the failure occurred.

What does it mean?

The definition of “surveillance” is “close observation, especially of a suspected spy or criminal.”

If Lee Harvey Oswald was, as cliche has it, a “lone nut,” he was the one and only isolated sociopath monitored by top CIA counterintelligence officers in the weeks and month before JFK was killed.

The surveillance of Oswald is perhaps the biggest JFK secret awaiting full disclosure by President Trump’s deadline of April 28, 2018.

[For more on the surveillance of Oswald, please buy my book THE GHOST: The Secret Life of CIA Spymaster James Jesus Angeton.

Additional details of the surveillance of Oswald can be found in Bill Simpich’s invaluable ebook, State Secret, published by the Mary Ferrrell Foundation. )