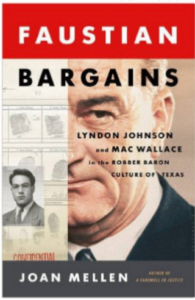 In her new book about Lyndon Johnson, Faustian Bargains, Joan Mellen does something all too rare in the world of JFK research. She checked an oft-asserted “fact,” and found it isn’t a fact at all, but a fiction.

But first, the book. Faustian Bargains is intended less as a biography of LBJ than a portrait of the “robber baron culture” of Texas” and corrective to Robert Caro’s magisterial multi-volume biography, which Mellen scorns for its favorable depiction of LBJ’s political skills and legislative accomplishments.

On one point, Faustian Bargains is especially useful. Mellen makes the very fair point out that Caro never mentions Bill Sol Estes, a con man whose multimillion dollar business schemes depended very much on his association with LBJ. Mellen is convincing that Caro’s omission of this story is a favor that LBJ’s historical reputation does not deserve.

Mellen also excavates in LBJ’s corrupt connections with Bobby Baker and George Brown of Brown & Root Construction Co. fame, who are not exactly ignored by Caro. Mellen’s debatable point is that LBJ’s corruption is more essential to understanding the man than anything else. It seems more credible to say that Johnson’s profound corruption was of a piece with his big accomplishments.

Mellen’s description of LBJ’s Great Society domestic agenda as a “cynical ploy” seems more rhetorical than fair, especially in the context of current American politics. If only Hillary Clinton and Donald Trump were so “cynical” to address persistent poverty in America with ambitious measures like Head Start, Medicaid, and affirmative action.

Where Faustian Bargains is most effective is showing how LBJ’s wheeling and dealing on behalf of himself and his business backers. Mellen shows how LBJ enriched Texas defense contractors, Ling Electronics and TEMCO, in his rise to power.

I was fascinated, but not altogether convinced, by her account of how LBJ absconded with gold bars stashed on the White Sands missile range in New Mexico. One of the sources for the story also alleges that Richard Nixon also enriched himself. LBJ and Nixon working the exact same scam strains credulity.

As for LBJ’s role in JFK assassination story, Mellen is discerning. She dispatches the only two pieces of “evidence” connecting Johnson to the murder of his predecessor.

One is the story of Madeleine Brown, LBJ’s mistress, who purportedly predicted on November 21, 1963 that he would not have to worry about the Kennedy’s anymore. Mellen shows why her story is not particularly credible.

But Mellen’s biggest service is to revisit the story of an unidentified fingerprint found on a box on the 6th floor of the Texas School Book Depository. Numerous JFK researchers have repeated the claim that the fingerprint was that of Mac Wallace, an LBJ associate who apparently murdered a man whom he believed to have slept with his wife. As Mellen shows with a careful reconstruction of the case, Wallace escaped punishment for the crime thanks to legal machinations of Texas politicos aligned with LBJ. From these events arose the hoary legend that Mac Wallace had something to do with JFK’s assassination.

Mellen kills the legend. She points out that the two “experts” who said that fingerprint came from Wallace were not certified identification experts at the time of their claims. They also used a faulty image of the fingerprint. She notes that the JFK authors who repeated the story of the Mac Wallace fingerprint often used identical language without ever bothering verify the claim.

By contrast, Mellen did the due diligence. She obtained a quality fingerprint image from the National Archives and showed it to an accredited expert, Robert Garrett, without disclosing the issue at stake. Garrett stated, without qualification, that the fingerprint does not match Wallace’s. Mellen reproduces his methodology. The Mac Wallace fingerprint myth has now been definitively debunked.

LBJ, she argues, understood that President Kennedy had enemies in his own government who would prefer he occupy the Oval Office. While LBJ was unnerved by the gunfire aimed at the presidential motorcade in which he rode on November 22, 1963, he seems to have contemplated what he would do if the president was killed. Mellen’s judicious conclusion is supported by fact.

66 thoughts on “In a new look at LBJ, Joan Mellen debunks the Mac Wallace myth”