While single-assassin theorists Max Holland and Luke Haag have an ongoing feud over whether the first shot fired at President Kennedy hit a street light mast, or simply hit the street, the strong probability is that both are wrong. 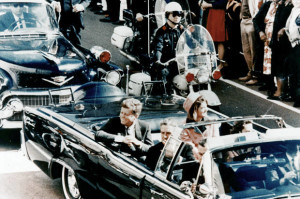 To be clear, the Zapruder film, accepted as authentic by both Holland and Haag, shows President Kennedy calmly waving to his right for a second or more after they claim the first shot was fired. Both Holland and Haag claim, furthermore, that Kennedy showed no reaction to the shooting for three and a half seconds or more after the first shot was fired.

And yet not one witness described Kennedy’s continuing to calmly wave after the first shot was fired.

Here’s a sample of what these witnesses actually said…

Witnesses from the follow-up car:

Holland and Haag’s theories regarding the first shot are thereby at odds with the evidence.

for decades, but Jeff Morley has more than suspicions. He has dug through countless sheaves of once-secret documents and interviewed so many spooks I’m surprised he’s not haunted.

Morley’s  new ebook CIA and JFK: The Secret Assassination Files, available on Amazon, provides the fullest account of the role of certain CIA operations officers in the events leading to the death of JFK.

1 thought on “JFK: the truth about the first shot”