And there I paused out of concern for a colleague.

I’ve heard that phrase before. It is used by football fans and Washington pundits alike. It has probably even been said about me, though never to my face. I don’t think its use discredits Milbank, an energetic reporter who pulls few punches while retaining a healthy sense of humor. But his use the phrase “going grassy knoll” indicates that he suffers from a common psychological malady known as JFK Panic Syndrome, a form of “cognitive dissonance” that is pervasive in the Washington press corps.
What is JFK Panic Syndrome?

Psychologists define “cognitive dissonance” as “the state of having inconsistent thoughts, beliefs, or attitudes, especially as relating to behavioral decisions.” JFK Panic Syndrome manifests itself when journalists (or pundits or historians) abandons their usual standards of professionalism when dealing with the fact pattern around the assassination of President Kennedy. The unfortunate victims of this affliction change their usual behavior–reporting and assessing facts–in favor of suppressing or distorting or ignoring facts.

Milbank’s case is illustrative. For those mercifully innocent of the JFK assassination story, the term “grassy knoll” refers to a tree-shaded, fence-lined parking lot area overlooking the Dallas street where President Kennedy was shot to death on November 22, 1963.
Milbank seems to believe that it is patently ridiculous to think a gunshot came from the area–just as ridiculous as believing Hannity’s yarn that Secret Service agents accompanying Hillary Clinton carried a syringe. As a factual matter he is wrong. There is no evidence the Secret Service agent was carrying a syringe (it was flashlight). By contrast, there is lots of evidence that a gunshot came from the grassy knoll.
Here’s what the facts show.
* Most of the police officers at the scene of Kennedy’s murder–at least 21 of them–thought a gunshot had come from knoll area. These trained law enforcement professionals included Dallas police chief Jesse Curry who immediately ordered his men to search the area, and Secret Service agent Roy Kellerman who was seated a few feet in front of JFK in the presidential limousine.
* Other eyewitnesses at the scene said the same thing. Merriman Smith, the UPI reporter who coined the term “grassy knoll,” discerned a gunshot had come from the front. So did bystander Bill Newman who was less than 15 feet away from Kennedy when the fatal shot hit. (Newman is an especially impressive witness, as learned when I did something that victims of JFK Panic Syndrome assiduously avoid: I interviewed him.)

* Dr. Robert McClelland, the doctor who stood over JFK in the last moments of his life examined the head wound for ten minutes. He says, without equivocation, that Kennedy was hit by gunfire fired from in front of the motorcade. Here is an excellent interview in which Dr. McClelland tell the story himself.

* No gunman was ever found there. Within a few minutes of JFK’s assassination, bystanders searched the parking lot and found footprints (never analyzed by police) and cigarette butts (ditto).
* No grassy knoll gunmen has ever been conclusively identified, as investigative reporters at The Onion have confirmed.
Reasonable intelligence people acting in good faith draw different conclusions from this body of conflicting evidence. JFK researchers note that a few minutes was plenty of time for a gunman to put a gun in the trunk of a car and walk away. JFK anti-conspiracy theorists conclude there was no gunman there.
What causes JFK Panic Syndrome?
If those were all the facts we had, Dana Milbank and other could fairly use the phrase “going grassy knoll”  to describe people who had a strong but unfounded suspicion.

But we do have other facts besides earwitness testimony. We have the home movie of the assassination, taken by Dallas dressmaker Abraham Zapruder. The famous and gruesome film shows Kennedy’s head and body blasted backwards, as if by a gunshot from the front.

(Please note the conditional language. I am not “going grassy knoll” here. I’m not asserting as a factual matter that a gunshot came from the front. Life is too short and JFK discussions are too long. Watch Zapruder’s film here, and decide for yourself where the shot came from. My opinion is unimportant.)
Like the Warren Commission itself, those who use the phrase, “going grassy knoll,” prefer not to think too hard about the evidentiary value of Zapruder’s film. The Commission’s report did not attempt to describe or explain what is seen on the film. The report merely stated that  Kennedy “fell to his left” after being shot.
That was factually inaccurate, if not deliberately misleading. New Orleans District Attorney Jim Garrison, the first person to show the film in public, had a much more fuller and more precise description, which Oliver Stone immortalized in “JFK, the movie. As Garrison rewound the film for a jury in 1969, he intoned what the Warren Commission dared not say. The fatal shot blasted Kennedy “backwards and to the left.”

I think a serious epidimological study would show that the Zapruder film is the primary cause of JFK Panic Syndrome. I’m sure Milbank has seen it. I’m sure he know that the government suppressed Zapruder’s film for twelve years. He probably knows that the film was shown on national TV for the first time by ABC New reporter Geraldo Rivera in March 1975. And he may even know that the government’s first attempt to explain the suppressed evidence came from the Rockefeller Commission.

It is here that Milbank abandons his usual journalistic skepticism in favor of an odd credulity. Milbanks knows the Rockefeller Commission was very much like the Warren Commission: a group of Washington insiders, selected to pass judgment on and defuse a controversial issue. He may even know that Rivera’s airing of the Zapruder film forced the Commission to attempt to explain the evidence that the government had been suppressing for twelve years.
This is what the Commission had to say in June 1975.

“the backward movement resulted both from a neuromuscular reaction and a ‘jet effect’ from the explosion at the right front of the head where the bullet exited.”

Milbank accepts this theory as a fact, which is a unfortunate failure of his usual professionalism.
The problem with the jet effect theory is that it was just that: a theory.  The “jet effect” was not subjected to the normal peer review required by scientific procedure. There was no review of the claim by doctors expert in neuromuscular reactions or physicists familiar with kinetic energy.
Later the author of this theory, Dr. Luis Alvarez, would cite as confirmation of the jet effect an informal experiment in which several cantaloupe melons struck by bullets flew towards the source of the gunfire. But of course, scientific observers are fairly certain that JFK’s head was not a cantaloupe. And Alvarez’s experimental results were never reproduced. So the scientific value of the Rockefeller Commission’s belated theory were nil. Yet Milbank seems to accept it. 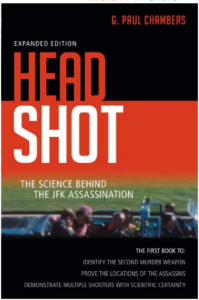 (The best treatment of the issue that I have ever read is a short book called “Head Shot,” by G. Paul Chambers, a government scientist with a PhD in physics. He demolishes both the jet effect and the neuromuscular anti-conspiracy theories while wisely abstaining from JFK theorizing himself.)
What causes Milbank to manifest the “inconsistent thoughts, beliefs, or attitudes” demonstrated by his strident defense of an unconfirmed theory? The answer, alas, is JFK Panic Syndrome.
Is there a cure?
If we take the “full grassy knoll” epithet literally, it would describe people who voice an unproven opinion (that there was a grassy knoll gunman) grounded in credible eyewitness testimony (some four dozen people) and some supporting evidence (the Zapruder film).
In this vein, we might say that people who think OJ Simpson is guilty of murder have gone “full grassy knoll.” Their opinion, of course, is unproven–no one has ever been found guilty of the murder of Nicole Simpson and Ron Goldman–but there is some witness testimony and other evidence to indicate that Simpson was responsible.
Of course, that is not what Milbank is saying about Sean Hannity. Milbank is saying that Hannity’s thought process is ludicrous and paranoid– which is entirely accurate, so far as it goes. But by using the rhetoric of “full Grassy Knoll” to make his point, Millbank inadvertently discloses that he suffers from JFK Panic Syndrome. He is demonstrating that he is either unfamiliar with the evidence of happened on November 22, 1963 or that he is unwilling or unable to accurately describe it. He suffers from a mild form of the extreme irrationality that he rightly attributes Hannity.
This doesn’t mean Milbank is a bad journalist or a bad person. It just means that has an affliction that is epidemic in Washington.  The good news is that JFK Panic Syndrome, while common and lamentable, is also curable. You just have to collect the facts and describe them accurately, and bingo, you are cured.