Cuba celebrates the 60th anniversary of the beginning of its revolution on July 26, 1953. Later this year America will commemorate the 50th anniversary of President John F. Kennedy’s assassination on November 22, 1963,

The events are ancient but linked. The connection between Cuba’s revolution and the death of the 35th American president remains a live issue in the political culture of both countries.

The assassination of JFK is one reason why this conflict between the United States and Cuba endures to this day.

1. The struggle for power in Cuba and JFK’s assassination

Some will scoff at the notion that the events of 50 years ago could possibly be relevant to Cuban-American politics today But when it comes to the U.S.-Cuba relationship remarkably little has changed in a half century.

In 2013, as in 1963, the United States imposes an economic embargo against the island, drastically limiting free trade and travel in a way that it does with virtually no other nation.

Now, as then, Cuba is a one-party state headed by a man named Castro, which controls the economy and free expression in the name of an impoverished egalitarian socialism and dignified Cuban sovereignty.

Now, as then, the two governments maintain a relationship of scornful disdain and diplomatic refusal.

It didn’t have to be this way.

In the fall of 1963, President John F. Kennedy was privately searching for a way to end this impasse. His brutal assassination in Dallas on November 22, 1963 — and what it said about the struggle for power across the Florida Straits — insured the ideological impasse between Washington and Havana would endure for decades.

Cuba was easily the most controversial foreign policy issue of Kennedy’s thirty four months in office — and for good reason. For the average Americans, Cuba was closer than Vietnam and more familiar than the Soviet Union. The national rebellion that brought Fidel Castro to power in January 1959 ended decades of U.S. domination of the island’s government. Havana would no longer be a decadent tourist destination for adventurous Americans.

For those invested in the political and economic institutions of Latin America in the 1960s, Cuba’s emergence as an independent republic was disturbing.

For those who believed U.S. domination of Latin American was exploitative and unjust, the Cuban Revolution was inspiring.

Whatever one’s politics, everyone could agree: Fidel Castro’s Cuba was a test of American power. The question, as JFK took office in January 1961, was, How would America respond?

Castro’s government expropriated the landed interests who had long dominated the island’s economy and diverted national resources to the poor majority. Castro and his revolutionary security forces routed the criminal syndicates, led by gangster bosses Meyer Lansky and Santos Trafficante who dominated tourism, gambling, and prostitution in Havana. They also hounded the CIA, forcing undercover operatives like David Morales and David Atlee Phillips to abscond to Miami. They demanded one-party discipline to repel yanqui domination.

Jack Kennedy, the youngest elected president in U.S. history, responded conventionally. He deemed Castro unacceptable. He approved continuation of the Eisenhower administration’s secret plans to overthrow and/or kill him, despite Castro’s unquestionable popularity with the Cuban people.

In early 1961, JFK signed off on the CIA-sponsored invasion plan as blessed by the Joint Chiefs of Staff of the U.S. armed forces. But when Castro routed the exile army at the Bay of Pigs in April 1961, the new president refused to provide direct U.S. military support for the invaders, insuring their defeat. To the exiles in Miami and the hawks of Washington, JFK was weak, if not treacherous.

Castro’s victory at the Bay of Pigs raised the geopolitical stakes, forcing a question that reverberated throughout the hemisphere: Would the United States let the nations of Latin America exercise their right to self-determination? Or would the United States invoke threats to its national security as justification for defining Latin American sovereignty in terms of Washington’s self-defense?

After the Bay of Pigs, JFK continued to seek Castro’s overthrow via a renewed secret war, run by the CIA in south Florida. When the Soviet Union responded with the secret installation of nuclear missiles in Cuba to defend Castro’s socialist experiment, JFK found himself engulfed by the missile crisis of October 1962.

Kennedy responded with his greatest feat of statesmanship. Overruling the Joint Chiefs of Staff and the majority of his civilian advisers, JFK refused to invade Cuba, He found a way to give the Soviet premier Nikita Khruschev a face-saving way to back down and remove the missiles without war.

The hawks in the Pentagon, the CIA and the conservative journals said Kennedy had squandered the chance to eliminate Castro. But most historians now agree JFK’s daring and adroit diplomacy  averted a war that was much more likely to go nuclear than his generals knew.

After the October 1962, JFK was a different kind of president.

While the hawks loathed his principled refusal to invade Cuba, he gained confidence in rejecting the logic that had twice brought United States to the brink of a war on the island. JFK had lived through war and did not romanticize it. The terrifying brush with nuclear war in October 1962 made JFK made an unconventional president.

In a word, JFK changed. In his famous speech at American University in June 1963, he embraced a strategy of peace, of co-existence with communism.

That summer, JFK began to entertain feelers from Castro, conveyed via ABC news correspondent Lisa Howard, that he was open to restoring normal diplomatic relations as long as Kennedy “went first.” JFK refused but he authorized William Attwood, a U.S. official at the United Nations, to keep the dialog going.

At the same time, his conventional impulses persisted. The CIA continued to conspire to assassinate Castro, probably with the blessing of JFK’s brother, Attorney General Bobby Kennedy who still hoped to overthrow Castro and install a reformist but pro-American government in Havana.

In his book, On November 19, 1963, deputy CIA director Richard Helms visited JFK in the Oval Office, and brought a machine gun, supposedly supplied by Cuba to revolutionaries in Venezuela. With this prop Helms sought to persuade JFK to take more aggressive action against Cuba. Kennedy was non-committal, saying sarcastically that the sight of a gun in his office made him feel much more secure. 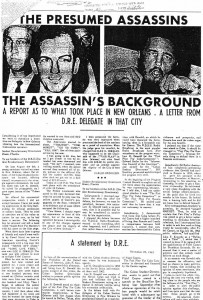 Three days later, JFK was shot dead as his motorcade passed in front of a friendly crowd in Dallas. A suspect named Lee Harvey Oswald was soon arrested.

In Miami CIA-funded exiles floated the first JFK conspiracy theory, paid for by U.S. taxpayers. They charged that the Oswald and Castro were “the presumed assassins.”

In Washington the successor government of Vice President Lyndon Johnson quickly mobilized to blame the crime on Oswald, a Castro supporter.

In Havana Castro sensed “a Machiavellian plot” to blame Cuba for a crime perpetrated by Kennedy’s enemies high in his own government, a scenario the Washington press corps did not care–or dare–to investigate

In September 1964 the Warren Commission, named after the liberal Chief Justice Earl Warren, but composed mostly of conservative Washington insiders, ratified that the theory of the “lone gunman.” The Washington press corps fell in line, even if most of the American people did not.

Polls show that most Americans believe that Kennedy was killed by a conspiracy of his enemies, though there is little agreement about who was responsible. Among the most plausible suspects are the enemies of JFK’s Cuba policy.

Kennedy’s assassination proved formative. In the fifty years that followed 1963, JFK’s vision of normalizing relations between the two countries would recur–and would be literally shot down.

It was another decade before the White House again began to explore the kind of rapprochement with Havana that JFK had pondered in the late 1963. In 1975 Secretary of State Henry Kissinger, impressed by the irrationality of the U.S.-Cuban conflict, decided a little beisbol diplomacy might help. As Cuba scholar Peter Kornbluh has documented, Kissinger began to explore the idea of preparing the American people for the idea of normalizing relations with Cuba via exhibition baseball games.

It was a sensible idea. Baseball is a common passion of the people of the two countries and many native-born Cubans had gone on to glory in the North American leagues.  But Kissinger’s scheme for détente with Cuba was, like JFK’s, aborted by violence.

On October 6, 1976, Luis Posada Carriles, a Cuban exile who had worked for the CIA, planted a bomb on a Cuban airliner returning to Cuba from Venezuela. All 78 people on board were killed. It was the worst terrorist attack on a civilian airliner in the Western Hemisphere until the attacks of September 11, 2001. It had the fingerprints of CIA agents all over it, and the U.S. government did nothing to apprehend the culprits.

In response Castro broke off all contact with the U.S. government and U.S.-Cuban relations again went into a deep freeze.

It would be twenty years before another U.S. administration attempted to thaw relations with Havana. In the mid-1990s Bill Clinton touted “people to people” contacts as the balm for hostilities between the two nations. His effort at detente also ended in violence.

In February 1996, the Cuban Air Force shot down two civilian aircraft, flown by anti-Castro exiles who had repeatedly flown into Cuban air space without permission. Four Cuban-Americans were killed. The White House and Congress blasted Cuba as a rogue state and relations returned to the now-normal state of offended hostility.

Since 2008 President Obama has made it slightly easier for Americans to visit the island but Washington’s irrational and hypocritical embargo is unchanged. The great champions of free trade in Washington fall silent in deference to the Cuban-American lobby, which still dominates U.S. policymaking.

All of which is fine with the government of President Raul Castro. The U.S. embargo keeps the creative destruction of global capitalism off the island, giving Castro’s government more time to manage the tricky but now-inevitable transition from inefficient socialism to a more open market economy.

All the while, the governments in Washington and Havana remain almost totally estranged.

Strange but true: The relationship between the American and Cuban people has never recovered from the gunfire in Dallas fifty years ago.