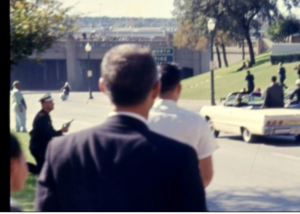 I found this remarkable photo in Robin Unger’s extraordinary galleries of JFK assassination photo. It was taken moments after gunfire that took President Kennedy’s life. At a glance we see exactly how two law enforcement officers responded to the sound of gunfire.

The policeman, at left with pistol drawn, is looking up at the Texas Schoolbook Depository where he thought some of the shots came from.

Right in front of him, but far in the distance, is another Dallas policeman parking his motorcycle so that he can run up to the area (in the upper right hand corner of the photo) known as the “grassy knoll” where he thought other shots came from.

19 thoughts on “Dealey Plaza: after the shots rang out”