After mixing Oswald with the anti-Castro and CIA-backed paramilitaries of Alpha 66 in a weird pot made of “special intent to kill President Kennedy soup”, Baer keeps on blighting a big-budget TV show by ignoring the body of the evidence, writes Arnaldo Fernandez.  With an insert by Milicent Cranor on the History Channel’s version of the “jet effect”.

END_OF_DOCUMENT_TOKEN_TO_BE_REPLACED 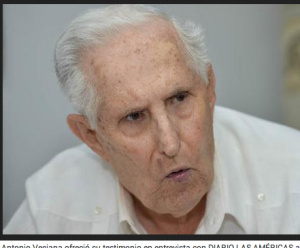 Rejecting conspiracy theories implicating Cuban leader Fidel Castro, a former militant foe of the Cuban government, said in a newspaper interview last week that his former allies at the CIA were behind the assassination of President John F. Kennedy on November 22, 1963.

Veciana’s statements are significant because he is known to have worked closely with the CIA for many years fighting the Castro regime. He has also long asserted that he saw a CIA man whom he knew as ‘Maurice Bishop’ in the company of Lee Harvey Oswald in September 1963, two months before Oswald allegedly shot and killed Kennedy.