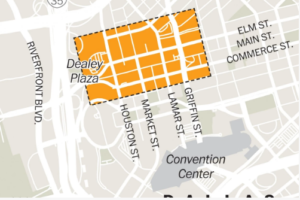 The country’s legacy of gun violence on terrible display.

The shootings, only a few blocks from Dealey Plaza, where President John F. Kennedy was assassinated in 1963, transformed an emotional but peaceful rally into a scene of carnage and chaos, and they injected a volatile new dimension into the anguished debate over racial disparities in American criminal justice.