What happened when Oswald was arrested?

In a 2013 essay for Time magazine,the late Gary Mack wrote about this photo of Oswald’s. The photo is interesting but the editorial treatment is fascinating …

What happened when Oswald was arrested?Read More »

Only four home movie photographers are known to have captured the assassination of President John F. Kennedy as his motorcade traveled through Dealey Plaza on Nov. 22, 1963.

Persistence pays. Eventually the thought police will back off, especially if you have tenacious counsel like Brad Kizzia.

No one can tell this JFK tale better than Dallas Observer’s inimitable Jim Schutze. 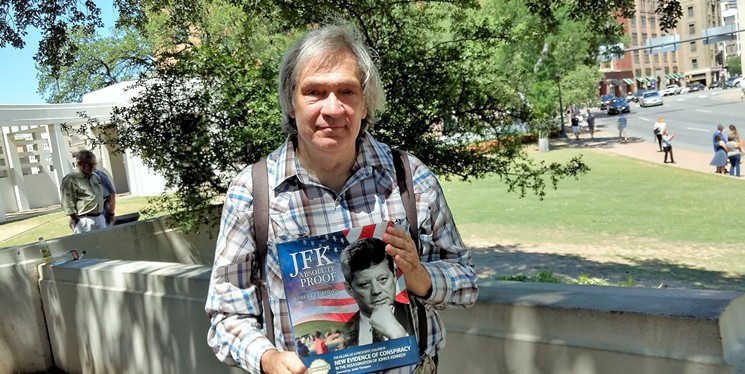 Jefferson Morley November 7, 2015
Charles Briggs, a retired CIA official who assisted the Sixth Floor Museum in Dallas as a researcher and writer, once submitted a “dishonest” sworn affidavit in a high-profile arms smuggling case in Texas, according to a federal judge.
Briggs, who died November 4, served the CIA as a private contractor while assisting in the creation of the Sixth Floor Museum in Dallas in 1986. The Museum, which commemorates the assassination of President Kennedy, consistently endorses the official theory that one man, alone and unaided, caused Kennedy’s death. The Museum’s exhibits do not depict or make mention of the long-running debate about the causes of JFK’s assassination, and the Museum’s bookstore carries few books by JFK scholars who dispute the official theory.

CIA man assisted in the creation of the Sixth Floor Museum

His name was Charles Briggs and he served as Executive Director of the Agency, which is the number three position in the agency’s hierarchy. His obituary in the Washington Post states:

A notable contribution was serving as liaison for the creation of the Sixth Floor Museum in Dallas, TX dedicated to the JFK Assassination.

The CIA’s intervention in the creation of popular culture is not unprecedented — witness its support for the Iowa Writer’s Workshop — but this episode of cultural production is especially intriguing. …

And a note on Gary Mack

From a faithful reader: “Gary used his expert knowledge with uncommon grace and skill – not only with his co-workers (of higher and lower rank), but with the media (thanks in part to his own radio/TV experience)….. …

And a note on Gary MackRead More »

Gary Mack, curator of The Sixth Floor Museum in Dallas, and a nationally known authority on the assassination of President John F. Kennedy, has died.

Mack made two important contributions to the JFK story.

A revisionist view of the Zapruder film

“Author and journalist Max Holland will trace the tangled history of the most famous yet misunderstood piece of evidence from the assassination: the 26.5-second long film made by Dallas businessman Abraham Zapruder.”

Four young photographers working for the daily newspaper Dallas Times Herald in 1963 were assigned to the team tasked with capturing the President’s much-anticipated visit to Dallas. They’ll be talking about their memories of that day on Tuesday, November 17 at 7 pm at The Sixth Floor Museum in Dallas.

One man’s encounter with Oswald

From a faithful reader in Dallas:

“On Saturday October 4, the Sixth Floor Museum’s 2014 Living History Series, presented a talk by Pierce Allman, who was the program director at WFAA Radio in Dallas on November 22, 1963. Allman was in Dealey Plaza at the time of JFK’s assassination, and was one of the first media representatives inside the Texas School Book Depository (TSBD) after the shooting.

One man’s encounter with OswaldRead More »

Yesterday, I asked the Sixth Floor Museum to comment on Robert Groden’s lawsuit against the City of Dallas for “malicious prosecution.” This morning I received this reply:

Paul Hoch begs to differ with me on Roger Stone. I think Stone’s upcoming book on LBJ and JFK’s assassination should be taken seriously because of Stone’s contacts and experience. Hoch finds Stone to be an unreliable analyst who is prone to exaggeration.

Hoch cites one point of fact — about Richard Nixon and Jack Ruby — where he thinks Stone is misinformed. His argument, endorsed by Gary Mack of the Sixth Floor Museum, provides a useful test of Stone’s credibility.

I have tremendous respect for Paul Hoch, who knows the JFK case better than almost anyone and has taught me a great deal about bad evidence. But in this case, I think he his mistaken, and Stone is probably right.