The message in the Kennedy Kards 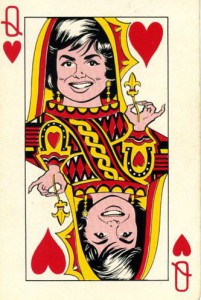 The now poignant Kennedy Kards deck was published in early 1963 when the public infatuation with JFK had been revitalized by his statesmanship in the Cuban missile crisis of October 1962.

JFK was the Jack of Hearts, First Lady Jackie the Queen of Hearts, and Bobby Kennedy, the King of Diamonds.

“Long live the King, Queen and Jack,” proclaimed an informational card that came with the deck.

Within the year, the Jack of Clubs, Vice President Lyndon Johnson, would be president. …

The message in the Kennedy KardsRead More »