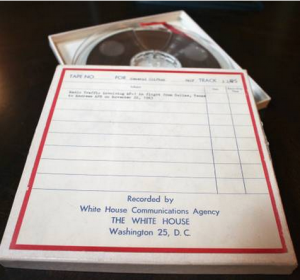 Did the Koch family have anything to do with JFK’s assassination?

That false and libelous claim, “KOCH FAMILY Had Role In JFK Assassination,” popped up in my Twitter feed today.

Did the Koch family have anything to do with JFK’s assassination?Read More »

Jefferson Morley March 11, 2014
“Was there a fake Secret Service agent on the grassy knoll?” a reader inquires
This headline from the Dallas Morning News in 1978 provides one answer.
…

A tough question for Oliver Stone

Rolling Stone asked: “Will the government ever release all of the [JFK] assassination records?”

‘Uplifting’ the spirit in Dealey Plaza

The city of fathers of Dallas plan to plant a memorial plaque to President John F. Kennedy near the spot where he was shot dead 50 years ago, reports the Dallas Morning News.

This foolhardly but revealing proposal captures Dallas civic culture at is most clueless.

Whatever its intentions, the idea of an “uplifting” plaque in the place where John F. Kennedy — a man, a husband, a father, a veteran of war, a visionary liberal, and a leader — died in a hail of bullets is not only in supremely bad taste. It also may also violate  National Park Service regulations requiring that the area be preserved as it appeared 50 years ago.