Assassination in the struggle for power in Cuba 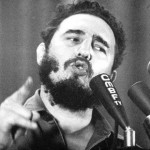 Assassination was not his tactic.

“So ‘LBJ and crew’ murdered John Kennedy, but Fidel ‘most certainly was not [involved]’? While I consider it unlikely that Oswald could have cooperated with anybody in a conspiracy, his visit to the Cuban Embassy certainly is intriguing. It is not like Fidel had never sanctioned political assassination in the past. For 50 years he has gotten away with knocking off Camilo Cienfuegos after Huber Matos didn’t do it for him.”

The ensuing fast and furious debate in the comments section on this subject is reminder that the history of assassination as a political technique in the struggle for power in Cuba from 1955 to 1965 is definitely relevant to any discussion of the assassination of JFK.