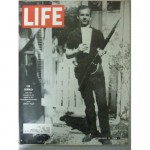 The single most popular story on JFK Facts for the week of April 10-17 recounted how Lee Oswald apparently fired a rifle shot at Gen. Edwin Walker, a right-wing firebrand and critic of JFK, in April 1963. The second most popular story linked United Methodist minister Lance Moore and theologian James Douglass as a unique type of JFK author:

What theologians can tell us about the JFK story

The Rev. Lance Moore joins James Douglass as a theologian who has thought long and hard about the JFK assassination. In a piece publised in Op-Ed News yesterday, Moore, an ordained Methodist minister, asks of JFK’s murder, “Why are they still lying to us?”

What theologians can tell us about the JFK storyRead More »