The 2016 election and the secret CIA memo targeting ‘conspiracy theorists’

Viewed dispassionately, “conspiracy theories” are controversial political messages about secret power. They purport to tell us how the world really works, as opposed to official accounts of government and experts. At a time when the credibility of federal government and news organizations is low, conspiracy theories flourish at the expense of public authority.

Credible or not, conspiracy theories have shaped the course of the 2016 presidential campaign. Conservative strategists Jerome Corsi and Roger Stone claim that Hillary Clinton has organized a conspiracy to conceal her own dire medical condition. Liberals Ezra Klein and Cass Sunstein warn that conspiracy theories distort our political discourse and endanger the political process. Who’s right? 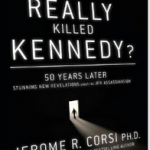 Corsi, author of the new book “Who Really Killed JFK?” is best known as the author of “Unfit For Command,” the 2004 best-seller that dragged the war record of Democratic presidential candidate John Kerry through the mud,

Stone is a Vietnam vet, a leftist, and director of the enduringly popular “JFK.’

But on JFK, Corsi finds common ground with the liberal cineaste. …

“Did JFK sign his death warrant by firing CIA chief?”

That’s the question asked by Jerome Corsi, the author best known for his 2004 best-seller, “Unfit for Command,” which peddled the false story that John Kerry did not deserve the medals he received as a boat captain in Vietnam war. …