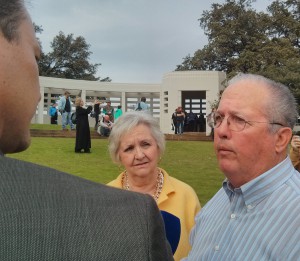 I was in Dealey Plaza yesterday and I saw Bill Newman talking to a TV correspondent. On November 22, 1963, Newman and his wife Gayle and their young two children were among the people closest to President Kennedy when the fatal shot rang out.

I recalled my own conversation with Newman seven years ago. We spoke in the lobby of the hotel where we were both attending a JFK research conference. A plumber by trade, he struck me as a down-to-earth man who accepted the accident that delivered him into one of the most decisive moments in American history, and he lived with it responsibly.

Here’s what Newman told me: