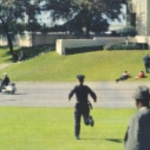 Cops runs to the grassy knoll

Readers responded to Sunshine Week in Washington by making our story about secrecy around JFK records the favorite story of the week. In self-referential twist, last week’s Top 5 Countdown was the second most popular story of the week thus landing in this week’s countdown. And for the 2nd week in a role the story of cops gravitating to the grassy knoll in the aftermath of JFK’s assassination came in at number 5. As we say in the journalism business, that story has legs.