Memorial Day 1963: Standing where he would be buried 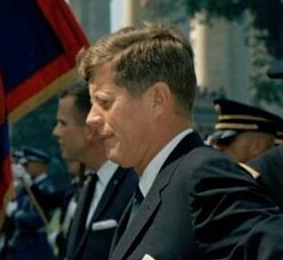 From historian Michael Beschloss, a glimpse of John F. Kennedy at Arlington Cemetery on Memorial Day 1963, one day after his last birthday.

“President Kennedy led the memorial observances by laying a wreath at the Tomb of the Unknown Soldier in Arlington. He was accompanied by his two-year-old son John Jr. who held tightly to the hand of a Secret Service agent.”

JFK was standing where he would be buried six months later.

It is a moving place with s wonderful view of Washington. I confess I haven’t been there for too too many years, and I have no excuse. It is a 20 minute ride from my house.