Deprecated: Function Elementor\DB::is_built_with_elementor is deprecated since version 3.2.0! Use Plugin::$instance->documents->get( $post_id )->is_built_with_elementor() instead. in /home/cnw9flf6e/public_html/wp-includes/functions.php on line 5379
 Three reasons why the JFK conspiracy debate helps the CIA > JFK Facts Skip to content

A reporter recently emailed to ask me to comment on the JFK conspiracy debate on the 50th anniversary. I declined with the following observations:
First, “conspiracy” is a narrow lens through which to view history.
The word is a legal term used by prosecutors who deploy subpoena and law enforcement powers to implicate people in criminal activity for the purposes of indicting them and convincing a jury of 12 people unanimously of their guilt beyond a reasonable doubt so as to deprive them of their liberty.
I’m a journalist, not a prosecutor. I have no legal training. I have no law enforcement powers. I’m not appealing to a jury. I’m not trying to put someone in jail. So “conspiracy” is not a particularly useful or appropriate tool for me to write the history of JFK’s assassination. 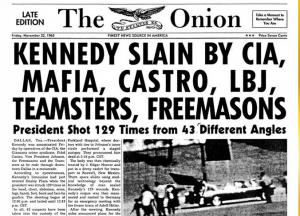 Second, we know for a fact that the vast majority of JFK conspiracy theories are wrong.
The events of November 1963 happened one way and one way only. The only theory that is correct is the one that accurately describes the chain of causality that lead to JFK’s assassination. Every other conspiracy theory is incorrect — every one of them. The Onion has made this point more effectively than I ever could.
Third, the manifest stupidity of many JFK conspiracy theories does not constitute proof of non-conspiracy.
That’s the logical fallacy that propelled poor Vince Bugliosi into writing a fat book about JFK’s assassination wrapped around a slender thread of the still-not-very convincing theory that one man was responsible. Debunking conspiracy theories is necessary, amusing (no, Aristotle Onassis was not behind the crime of Dallas; the Federal Reserve did not lurk on the grassy knoll) and profitable for its most dedicated practioneers. But debating conspiracy theories is, by definition, mostly a discussion of what didn’t happen, not what did. It is a distraction. I think I’ll pass.
It makes more sense, at this late date, to focus on a more modest enterprise. I use documents, interviews and litigation to answer the question: “What did certain CIA officers know about Lee Harvey Oswald before Kennedy’s assassination?”
This is an empirical question which the CIA is required by law (the JFK Records Act) to answer. Yet it refuses. The agency’s continued censorship of key JFK material (such as these five files, plus two more) is proof of that. Not only does the CIA have no legal obligation to respond to conspiracy theories, the proliferation of speculation helps the CIA’s obfuscate what it still illegally withholds by distracting a skeptical public and complacent news media from the central unanswered question in 2013:
Why did senior CIA officials monitor Lee Harvey Oswald’s travels, politics, and contacts for four years, and then, when he allegedly killed the president, hide their knowledge from all investigators?
My only JFK theory is that the CIA will comply with the law. This theory, I admit, is unproven.