Within hours of JFK’s death on November 22, 1963, members of the Cuban Student Directorate, a CIA-funded organization based in Miami, linked suspected assassin Lee Oswald to Cuban president Fidel Castro. They were “the presumed assassins.” The allegation was published in a special edition of the group’s publication, Trinchera (Trenches) dated November 23, 1963.

This was the first JFK conspiracy theory to reach public print. According to declassified records, it was paid for by a decorated undercover CIA officer, the late George Joannides.

Within the CIA, the Directorate was known by the code name AMSPELL. The group was “conceived, created and funded by the Agency in September 1960 and terminated in December 1966,” according to a CIA memo, dated April 1967.

“Members were used through 1966 as political action agents for publishing propaganda … and producing radio propaganda and special propaganda campaigns,” the CIA memo states. 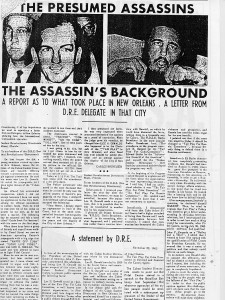 Joannides served as chief of psychological warfare operations in the CIA’s Miami station. He also  handled contacts with the DRE, according to his July 31, 1963, job evaluation. In return for CIA support, the group engaged in “intelligence collection, political action and propaganda.”

The DRE’s post-assassination scoop publication emphasized the pro-Castro remarks that Oswald had made during debate on a New Orleans radio program with DRE delegate Carlos Bringuier three months before. Oswald had been exposed as a communist — and now he had killed the president.

He and Castro, the group declared, were “the presumed assassins.” The DRE used its international network to publicize the charge throughout Latin America, according to this document found in the DRE Papers at the University of Miami library.

What Joannides thought of the DRE’s use of CIA funds to publicize its view of Oswald is unknown. The CIA recently admitted for the first time that Joannides maintained a residence in New Orleans as part of his assignment in 1962-64.

The publication was handed out to worshippers arriving at a Catholic Church on Key Biscayne on the morning of November 24, 1963. A FBI agent in the crowd took a copy and filed it at the office.

Thus the first JFK conspiracy theory was published within 48 hours of Kennedy’s murder, and the CIA had paid for it.

50 thoughts on “Who paid for the first JFK conspiracy theory?”