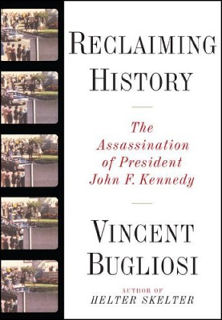 My dealings with the man were always cordial, though not productive. I read as much of his mammoth Reclaiming History as I could. I came away agreeing with him that there were many implausible JFK conspiracy theories out there–in addition to the also-implausible anti-conspiracy theory that he advocated.

And that was what was problematic about Bugiliosi’s intellectual approach to the JFK story. The idea that you could get at the truth about JFK’s death by refuting every false theory strikes me as very odd. A historian would never write  a book about the causes of World War II by trying to refute every interpretation but his or her own. Why would you address the JFK story in such a backhanded way?

“Because there are so many bad theories out there,” he said when I met him.

I couldn’t disagree with that. The problem with that approach is that Reclaming History was ultimately less about the events that culminated in JFK’s death, and more about things that didn’t happen and implausible theories about things that didn’t happen. As for the question interests people–what did happen in Dallas?–Vince had not that much new to say.

Despite its girth Reclaiming History is actually amounts to a slender book that restates the conclusions of the Warren Commission, without addressing most of the basic objections to it. As for the contradictory evidence, Vince often dealt with it by saying that, since all conspiracy theories were wrong, any evidence that might lead one to believe a conspiracy theory could not be reliable. This, of course, was a circular argument that wonderfully reinforced the conclusions he already drawn. Vince drove laps around this argument, endlessly proud of his dedication to truth and oblviious to the fact that he wasn’t getting anywhere.

Like a lot of JFK obsessives, Vince wanted to talk about theories more than he wanted to talk about  facts..I asked him, for example, what he made of the George Joannides story? What could explain the actions of a man whose paid assets among the anti-Castro Cubans had contact with Oswald before JFK’s assassination in 1963 and who came back to block Congress’ investigation of this fact 15 years later.

Did he think the CIA man knew about Oswald before the assassination and chose not to report what he knew? Or was he running a psychological warfare operation that involved Oswald?

In response he demanded to know if I believed senior CIA officers would so stupid as to conspire with Oswald. I said, in the case of Joannides, I couldn’t really say what he was doing since since the CIA was (and is) withholding information about his’ operations in 1963.

“Well, what’s your theory?” he asked.

I said I was journalist, and I didn’t write about theories. I said I thought the CIA should release the facts. He agreed and signed an open letter to the CIA, published in the New York Review of Books, calling for the release of the Joannides files.

“But you know there’s nothing in there,” he told me, as if to reassure himself.

“But they overclassify all the time,” he said.

I agreed that was true. But that didn’t mean that the agency was only be hiding trivia.

Ultimately, Vince’s book was highly theoretical.  Since the Joannides story is a set of facts, not a theory, Vince never wrote about it. In our conversations, he tried to refute the facts.

The Joannides story was based on unreliable Miami informants, he said. No, actually it was based on CIA documents which confirmed what the Miami sources said.

The CIA didn’t have a relationship with the anti-Castro DRE in 1963 because they were out of control, he tried. No, actually, the CIA continued giving the group lots of money after they acted “out of control.”

So in his book–actually in the footnotes–he dealt with this set of facts by conjuring up a theory. He said that he knew what my theory was: that the CIA and David Phillips were behind JFK’s murder. When I saw him next  I explained to Vince that that was not my theory, and he looked at me with squinted eyes. He just couldn’t believe it.

His non-fiction efforts, which took on controversial subjects, included “Outrage: The Five Reasons Why O. J. Simpson Got Away With Murder,” and “The Prosecution of George W. Bush for Murder.” Bugliosi Jr. said his father was most proud of his nearly 2,000-page examination of the Kennedy Assassination, “Reclaiming History,” which took over 20 years to write.