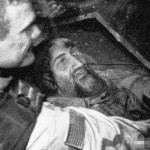 For U.S. officials  to think they can suppress the historical record in a networked world is a sign that they are suffering from Pre-Snowden Syndrome: the belief that most of the people can be fooled most of the time.

via the Washington Free Beacon.