The Today Show’s story about the break-in at an FBI office in 1971 is important because it reminds us of the pregnant connections between COINTELPRO and the assassination of President Kennedy.

“Members of the burglary team, armed with little more than a crowbar and wearing  suits and ties, then walked off undetected with suitcases stuffed with sensitive bureau files that revealed a domestic FBI spying operation known as COINTELPRO. The heist enraged the bureau’s legendary Director J. Edgar Hoover, who launched a massive but ultimately futile manhunt.”

via “After 43 years, activists admit theft at FBI office that exposed domestic spying.” (The New York Times has picked up on the story too.)

Remember that COINTELPRO is short for “Counterintelligence Program.”

Remember that the Counterintelligence Staff, headed by James Angleton, was the component of the CIA that tracked Lee Harvey Oswald closely from October 1959 to November 1963.

As historian David Kaiser revealed in his deeply researched book “The Road to Dallas,” COINTELPRO targeted the pro-Castro Fair Play for Cuba Committee for disruption and discrediting in the summer of 1963. At the time Lee Harvey Oswald was founding his own chapter of the FPCC in New Orleans — over the written objections of the FPCC’s leadership.

As Bill Simpich documents in his revelatory and important ebook, “State Secret,” the FBI and the CIA’s counterintelligence staff worked together on a program to discredit the FPCC 1963 throughout the fall of 1963.

Here’s the CIA’s Sept. 16, 1963 memo to the FBI about the operation to discredit the FPCC “in foreign countries.”

The author of the memo, John Tilton, was a supervisor of George Joannides, the Miami-based undercover officer whose paid assets in the Cuban Student Directorate (DRE) publicized and denounced Oswald’s pro-Castro activities in New Orleans in August 1963. 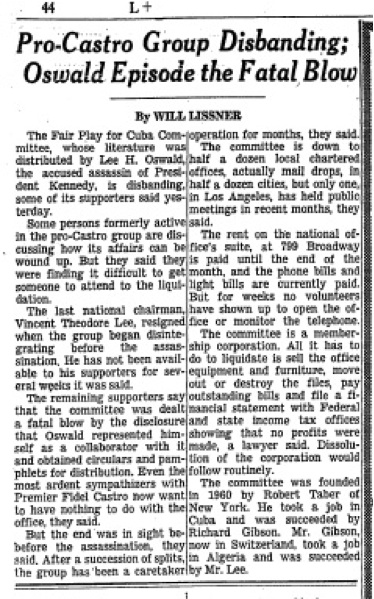 Eleven days after Tilton wrote his memo, a man identifying himself as Lee Harvey Oswald appeared at the Cuban Consulate in Mexico City applying for a visa to travel to Cuba. He gave his self-made FPCC membership card as part of his visa application. Officials in the Cuban Embassy were suspicious of Oswald and rejected his application.

After Oswald was killed in police custody, the White House and the FBI moved to convince the public Oswald was the sole assassin.

The wishes of the CIA and FBI came true. The FPCC disbanded on December 27, 1963, its name forever tainted by the linkage to the accused assassin.

As Simpich notes correctly, “Counterintelligence is the hidden heart of the story…”

And we first learned about COINTELPRO thanks to the people who came forward today.

Will we ever know the full story?

Among the secret JFK files still held by the CIA are the operational files of Bill Harvey, Birch O’Neal, and David Phillips, all of whom worked on anti-FPCC counterintelligence operations.

These files will be released in October 2017 at the earliest.

The CIA targets the FPCC in a foreign country in September 1963.

24 thoughts on “The JFK connection: Why COINTELPRO still matters”