Phil Shenon and I agree on at least a few things. In any resolution of the mysteries surrounding the assassination of President John F. Kennedy, Mexico City will undoubtedly be important. The investigation into what happened there in 1963 was, for some reason, seriously curtailed by the U.S. government. The government has, since then, fought tooth and nail to keep the full story about what happened there secret.

While I have never met Shenon, I have spoken with him several times by telephone. I first heard from him when he called me around 2011. He introduced himself as a reporter for Newsweek Magazine. He said he was working well in advance on an article for that magazine for the 50th anniversary of JFK’s murder. He wondered whether I would be willing to talk about the HSCA’s investigation in Mexico City. I agreed to speak with him. …

The decision was affirmed by Judges Douglas Ginsburg and Sri Srinvasan.

I’m the plaintiff and I have added my comments:

Morley contends that some of the documents turned over—a couple of travel records and a photograph and citation relating to a career medal once received by Joannides—shed some light on President Kennedy’s assassination, but the value of these documents is at best unclear.

Morley:  If the CIA wants to clear up the story of George Joannides’ secret operations in 1963, it is free to do so at any time. I hope they will do so before October 25, 2017 when the JFK Records Act mandates the release of the agency’s still-secret JFK assassination-related records.

Morley’s request had potential public value. He has proffered—and the CIA has not disputed—that Joannides served as the CIA case officer for a Cuban group, the DRE, with whose officers Oswald was in contact prior to the assassination.

Morley: No one is much surprised that the CIA sees no “public benefit” in talking publicly about certain covert operations in late 1963. That’s politically understandable in Langley. It is not legally acceptable in the context of JFK, says the court.

Where that subject is the Kennedy assassinationan event with few rivals in national trauma and in the array of passionately held conflicting explanationsshowing potential public value is relatively easy.

Morley: This is not a controversial proposition. Full JFK disclosure has public value. The CIA disagrees but the law and Judge Williams and common sense say otherwise.

Last month, the CIA released a presidential daily briefing from November 25, 1963, which revealed senior agency officials hid the extent of their pre-assassination knowledge of suspect Lee Harvey Oswald from the White House. The briefing showed where the CIA’s JFK cover-up originated: in the Directorate of Operations and the Counterintelligence Staff.

The revelation is a kind of prequel to another recent disclosure:

Two JFK corrections for the Internet

Joe Giambrone got some things right and some things wrong in his dispatch last November about my JFK reporting: Where There’s Smoke There’s Fire | Political Film Blog  …

What you need to know about the Warren Commission is…

Via George in the UK:

“… the Warren Commission did not know that the DRE were CIA assets….

In a court motion filed last week, the CIA acknowledged for the first time that deceased CIA officer George Joannides lived in New Orleans while handling contacts with an anti-Castro student organization whose members had a series of encounters with accused presidential assassin Lee Oswald in August 1963.

The unexpected admission came in arguments before a federal court judge about whether the CIA is obliged to pay $295,000 in legal fees incurred during my Freedom of Information Act lawsuit concerning certain 50-year-old JFK assassination records.

In a previous court filing, my attorney Jim Lesar argued that two documents released over CIA objections in 2008 were significant because they showed that Joannides’s espionage assignment took him to New Orleans where Oswald lived.

Waiting out the Warren Commission, the HSCA and … the American public?

Not sure anyone wants to hear from an “irresponsible fanatic” (I’ve been called worse things) — especially one who hardly followed the JFK controversy for 25 or so years after working for the House Select Committee on Assassinations in 1978, but I want to add to the point of a recent JFK Facts post: the CIA chose to wait out the Wareen Commisions

They did the same to us at the HSCA.

Waiting out the Warren Commission, the HSCA and … the American public?Read More »

The hidden history of the first JFK conspiracy theory 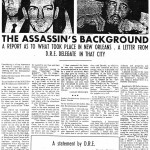 Last week, Joseph Lazzaro of International Business Times followed up on a JFK Facts story with some historical perspective.

The hidden history of the first JFK conspiracy theoryRead More »

Who paid for the first JFK conspiracy theory?

Who paid for the first JFK conspiracy theory?Read More »

In his July 23 decision that the CIA did not have to pay legal fees in my Freedom of Information Act lawsuit for the records of a deceased CIA officer, Judge Richard Leon stated, correctly that I had argued that “the news media has shown interest in covering the disclosed records but he fails to tie any of the coverage to any of the newly released documents rather than those that were already available to the public.” …

A federal court ruled Tuesday that my lawsuit for the records of deceased CIA officer George Joannides “serves a public benefit” and ordered a lower court judge to reconsider his decision to deny the award of legal fees.

A three-judge appellate panel declared that Judge Richard Leon had erred in his September 2012 decision that the governnrnent did not have to pay my court costs for 10 years of litigation. In 2007 the D.C. Court of Appeals ruled in favor of arguments made by my attorney, James Lesar, who contended that the Freedom of Information Act (FOIA) obligated the CIA to release more records about Joannides. …

A Justice Department official denied in a federal court filing last month that undercover officer George Joannides received a CIA medal for deceptive actions related to the assassination of President John F. Kennedy 49 years ago but the claim cannot be verified.

“The CIA has consistently challenged the notion that a career award could be seen as explicit or tacit approval of any one assignment in Joannides’s 30-year career,” asserted Ronald Machen, U.S. Attorney for the District of Columbia, in a brief filed on Nov. 21 in the D.C. Court of Appeals.

Machen’s brief is the government’s latest legal salvo in my decade-old (today) Freedom of Information Act (FOIA) lawsuit over JFK assassination records. At issue are ancient but still-sensitive U.S. government documents related to the murder of President John F. Kennedy on November 22, 1963.

In recent years, the CIA has grudgingly acknowledged that Joannides served as the Miami-based handler of a Cuban exile group whose members who had a series of encounters with accused assassin Lee Harvey Oswald three months before JFK was killed.

The agency also acknowledges that Joannides served as the CIA’s principal coordinator with the House Select Committee on Assassinations (HSCA) in 1978 but did not disclose his role in the events of 1963 to investigators.

“That concealment has fueled suspicion that Mr. Joannides’s real assignment was to limit what the House committee could learn about C.I.A. activities,” wrote reporter Scott Shane of the New York Times in 2009. …