Doug Horne, former investigator for the Assassination Records Review Board, welcomes the end of Hardball, the CNN talk show hosted by Chris Matthews.

“He was a dinosaur whose departure was long overdue,” Horne writes 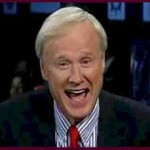 With the 50th anniversary just two months away, allusion to the assassination of the 35th president comes in all shapes and sizes.

This week the conservative Daily Caller used it in a spoof-within-a-spoof — a pretend “Playbook” column from the Beltway Bible Politico making note of a fictional blog post by MSNBC’s Chris Matthews:

The talismanic power that the JFK story holds for senior Washington journalists such as Chris Matthews and Brian Williams is evident in this NBC story that aired on Thursday. These mementos of Kennedy’s life are like the relics of saints, treasured as an expression of faith in an exemplary personality. Yet the very power of this faith seems to forbid mentioning a heretical fact.

RFK Jr. resets the JFK debate with his remarks in Dallas

You know how the conventional wisdom about gay marriage went from icky controversy to cuddly wisdom over the last four years?

You know how cannabis legalization went from stoner madness to sensible libertarianism in the past eighteen months?

Something like that is about to happen with  the JFK assassination story. The elite media Washington consensus about the JFK story is evolving from the fringe to the mainstream, propelled by this straightforward report from the Dallas Morning News. …

RFK Jr. resets the JFK debate with his remarks in DallasRead More »