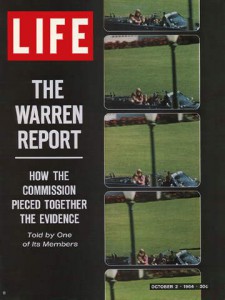 Peter Mandel, author of children’s books, has a sad piece in the Huffington Post about how happy memories of his father who died when he was eight have been clouded by JFK conspiracy theorists. One can only sympathize. The sins of the father should never be visited upon the son.

Mandel’s father, Paul Mandel, was a Life magazine staff reporter who wrote an erroneous story about Abraham Zapruder’s film of JFK’s assassination in 1963. Some unprofessional writers jumped his mistake and published stupid, unsubstantiated claims about him and even stupider claims about his death from cancer in 1965. Megan Knuth usefully picks apart this rubbish at John McAdams’ JFK Web site.

But the fact remains that Paul Mandel, wittingly or unwittingly, did make a terrible mistake in print, reporting a falsehood as truth on one of the biggest news stories of the 20th century. Whatever his intentions, his misstatement was approved by his bosses at Life, apparently for the sake of reassuring the public that there was no conspiracy behind JFK’s death.  (If somebody has a better alternative explanation of why this mistake occurred, please email me here.) If that was their intention, they not only failed. They stoked more suspicion.

Of course, Life’s monumental error does not prove or justify stupid JFK conspiracy theories. Rather, it illuminates the perverse pop media culture that now dominates the telling of the JFK story 50 years later, a compact of mutual incomprehension that unites mainstream news organizations willing to shade (or ignore) the facts in service of the official theory of a “lone nut” with a conspiracy community too often willing to the same in service of their pet scenarios.

Peter Mandel’s Huffington Post piece shows how this dialog of the deaf now controls popular and individual understanding of the JFK assassination story–and that is perhaps the saddest thing of all.

What the Zapruder film showed

In the December 3, 1963 issue of Life, an article under the byline of Paul Mandel, reported the following about JFK’s assassination:

“The doctor said one bullet passed from back to front on the right side of the President’s head. But the other, the doctor reported, entered the President’s throat from the front and then lodged in his body. Since by this time the limousine was 50 yards past Oswald and the President’s back was turned almost directly to the sniper, it has been hard to understand how the bullet could enter the front of his throat. Hence the recurring guess that there was a second sniper somewhere else. But the 8mm film shows the President turning his body far around to the right as he waves to someone in the crowd. His throat is exposed–toward the sniper’s nest–just before he clutches it.” [emphasis added]

That last sentence is factually and demonstrably wrong, as any viewing of Zapruder’s film shows. The president did not turn around. His throat was not exposed to the gunman firing from behind the presidential motorcade. If Paul Mandel reviewed the film–and his colleague James Wagenvoord said he “definitely” did–then he badly misreported the facts. It gives me no pleasure to state this, and I don’t mean to disparage any of his other professional accomplishments. It is merely the truth that false statements appeared under his byline.

Peter Mandel is understandably upset with commentary about his father’s article that he found on unnamed JFK assassination Web sites:

Here the unnamed conspiracy theorist’s assumes that because Paul Mandel wrote something that was inaccurate, he was guilty of intentional fabrication and deceit. This is asserted without bothering to include Mandel’s side of the story and scanting the possibility that there was some other explanation.

*”When Mandel discovered that the [Zapruder] film was inconsistent with the lone assassin theory, he either shaded the article to cover up a conspiracy or was coerced into doing so by the editor of Life.”

This is a more careful formulation, albeit speculative. Life magazine was a heavily edited publication so Paul Mandel’s article  was certainly approved by his superiors in the Time-Life organization. It is possible that Mandel’s editors, not Mandel, misstated the facts about the Zapruder’s film.

*”Because of Mandel’s knowledge of a conspiracy, he mysteriously died.”

In fact, there was nothing mysterious about Paul Mandel’s death. He died of melanoma in 1965. Another conspiracy theorist suggests that Paul Mandel’s article showed that he had advance knowledge of a conspiracy to kill JFK.  This is the sort of unsubstantiated innuendo that recurs too often in JFK discussions. Peter Mandel is right to loathe it.

Peter Mandel cannot explain his father’s mistaken description of the Zapruder film and does not dwell on it. All he says is,  “I had always thought that Life editors were serious pros, that fact-checkers there scoured every word.” That’s a perfectly reasonable assumption. But in the case of his father’s article Life’s fact-checkers failed and failed badly.

Peter Mandel can and should take consolation from that fact that his father’s mistake was not his alone. If Life magazine intended to reassure its readers by misleading them about  what the Zapruder film showed, they made a terrible mistake and the blame falls on the editorial leadership of the magazine, and not on any individual writer.

Paul Mandel did not obscure the story of the Zapruder film any more than his bosses. Far less, in fact. It was the corporate leadership of Time-Life Inc. that blocked public release of Zapruder’s film for more than a decade after JFK’s death. Today live footage of a presidential assassination would online in within hours, if not minutes. Back then the government of Lyndon Johnson and Time-Life colluded to prevent public viewing of Zapruder’s film for a dozen years after JFK’s death.

Zapruder’s film was first broadcast by Geraldo Rivera on ABC’s Good Morning America show in March 1975. By then Paul Mandel was dead and could not explain his description of it. That disservice to the truth cannot be blamed on JFK conspiracy theorists.