I saw JFK author Phil Shenon, author of “A Cruel And Shocking Act,” on TV this morning. Then I listened to him on NPR this afternoon.

He said some smart things to NPR’s Dave Davies about the JFK assassination story, even if I don’t agree with all of them. 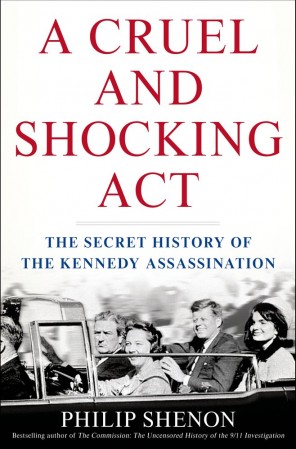 SHENON: “You know, a big theme of my book is the destruction of evidence, and the destruction of evidence begins within hours of the president’s death. President Kennedy is assassinated on a Friday. On Saturday night, his autopsy report is pushed into the fireplace by the Navy pathologist. Several hours after that, FBI agents in Dallas shred a handwritten note that Oswald had left for them just a few weeks before and flush it down the toilet.”

It was a relief to hear a former New York Times reporter acknowledging the rich tapestry of deceit and denial that followed the public murder of the popular liberal president. That sometimes gets skipped over by JFK authors eager to sell their reassuring tomes about the tragedy of Dallas.

And its nice to hear from a top-notch investigative reporter who has his JFK facts straight. In the recent movie “Parkland,” the Oswald note is depicted going up in flames. Shenon has tracked the story down. The witnesses said the Oswald note was flushed, and indeed it was. The FBI destroyed material evidence within days of JFK’s murder.

And the closer you look at this tapestry of deceit, the more certain moments stand out as significant, says Shenon.

He points to  the sojourn of the accused assassin to Mexico City in October 1963 as a key. I can’t criticize him because I have been saying much the same thing since the University Press of Kansas published my biography of the CIA’s Mexico City station chief Win Scott, “Our Man in Mexico,” in 2008.

Indeed, Shenon nicely summarized the plot of “Our Man in Mexico“ for NPR listeners.

SHENON: “Well, it’s remarkable to discover that the CIA may have had Oswald under pretty aggressive surveillance in Mexico City. There were reports years later that there were photographs of Oswald in Mexico City that the CIA had taken. There were tape recordings of his telephone calls in Mexico City. And all of that evidence would later disappear. The tapes, the CIA would say, were erased and the photographs, they would claim, never existed, even though there’s a fair amount of evidence to suggest they did.”

Like I say, a fair summary: If you want the full story, buy and read “Our Man in Mexico.”

On the conspiracy question, Shenon says he’s sticking to the lone gunman theory, which is certainly the safest thing to say if you want to get invited to speak on NPR again. Whether that conclusion is warranted by fact is another issue.

Shenon argues that the FBI destroyed the Oswald note and the CIA destroyed most of the evidence of its surveillance of Oswald in Mexico City because it was potentially embarrassing — but not because it was actually incriminating in the wrongful death of JFK. Shenon shares the happy Washington faith that the CIA and FBI had no guilty knowledge to hide in regards to Oswald and the assassination of JFK.

I suspect the reverse is more likely: the CIA and FBI destroyed evidence related to accused assassin precisely because they had something big to hide. (What that something is a topic for another time: namely JFK Lancer’s November in Dallas conference next month where I will give the keynote address.)

That said, my differences with Shenon on the conspiracy question strike me as secondary to our agreement on what is the most important new fact to come into the public record of JFK’s assassination in recent years.

The JFK story people need to know in 2013, says Shenon, concerns the

“extensive attempts by both the CIA and FBI to withhold just how much they knew about Kennedy assassin Lee Harvey Oswald in the weeks and months before he killed the president.”

I agree. Oswald was not a socially isolated misfit who up and shot the president for no reason. He was a man watched closely and constantly by U.S. intelligence and law enforcement as he made his way to Dealey Plaza. Whether the CIA acted with reckless disregard for JFK’s life or whether they were merely negligent in failing to intercept Oswald has yet to be determined in my view.

Shenon may shy from breaking with the official theory of a lone gunman. But this does not disqualify his presentation of the new JFK assassination evidence. It is fair — and fairly damning.

The story of Winston Scott, the chief of the CIA station in Mexico City, is central to understanding the JFK assassination story.

If you’d like buy an autographed copy of “Our Man in Mexico,” send me an email here.

Specify which edition you would like to receive: hardcover, paperback, or the Spanish (“Nuestro Hombre en Mexico” was published by Taurus Mexico City in 2010)

22 thoughts on “Shenon to NPR: ‘The destruction of evidence begins within hours of the president’s death’”