Deprecated: Function Elementor\DB::is_built_with_elementor is deprecated since version 3.2.0! Use Plugin::$instance->documents->get( $post_id )->is_built_with_elementor() instead. in /home/cnw9flf6e/public_html/wp-includes/functions.php on line 5379
 Ronnie Dugger's message to Obama > JFK Facts Skip to content 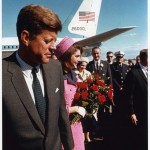 “Mr. President, I was in one of the two press buses in the presidential cavalcade in Dallas then when Mr. Kennedy was murdered, covering for the Washington Post and my Texas newspaper, the Texas Observer. An hour or so before at Love Field I was a person or two behind the rope when he and Ms. Kennedy came down the ramp. They were beautiful in the midday sunlight. Beautiful.”

“Many of us, for the truth in history, lessons to be learned, the honor of our country, would be grateful, sir, if half a century later — half a century — you would take over the control of all the government’s remaining inexplicably still-hidden-from-us records on that event, specifically presidentially seizing those decisions completely away from the CIA concerning their hoarded files, and except as only you alone decide what may not yet be revealed, complete our government’s faithful execution of the 1992 Kennedy assassination records law (not to mention the people’s rights in our own history).

“Mr. Morley on the reliable JFKFacts website informs us there are more than a thousand records still lodged in the imprisoned files 50 years later. 2017, you won’t be President, and the hiders might well after that keep on concealing the truth, whatever the hell it is. Do this now for us, please, Mr. President. If you do we will all thank you. I will be coming to Washington to see these records.”

“Respectfully, Ronnie Dugger, Austin, Texas, biographer of Johnson and Reagan, other books, now writing a work on steps to be taken to avert nuclear war, concerning which I will be asking you and Ms. Power for interviews.”