After I commented on Jim DiEugenio’s CTKA essay on The State of the JFK Case: 50 Years Out, I heard  from more than one reader who took exception to my defense of Phil Shenon’s JFK book,  “A Cruel and Shocking Act.”

“Shenon’s book is another limited hang-out. After 50 years, that’s not progress. If the book had come out in the 1970s, it might be more significant. It contains a few juicy tidbits of ‘new’ information, but the overall substance of the book is misleading” 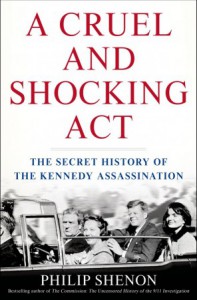 “Shenon connected the WC ‘finding’ of the lone gunman shooting a magic bullet with the long-ago debunked anti-Castro story by Mexican novelist and playwright Elena Garro. He recycled her worthless testimony about Oswald at a ‘twist’ party in Mexico City for transfiguring it as the occasion seized by ‘DGI agent’ Sylvia Duran for putting him up to kill Kennedy.
That’s quite a cruel and shocking act against the reader nowadays, since even Win Scott made this remark to the Garro allegation in 1964: ‘She is also nuts.’
Recycling Garro and twisting Duran hopelessly spoil the party with the rest of the significant stories.”

“Shenon’s book is a propaganda piece designed to appear ‘objective.’ One is better served by reading DiEugenio’s takedown of the book rather than the book itself.”

To which I say, Shenon has a different analysis of the facts than you and I. So what? A lot of people do. We wouldn’t be arguing about the causes and implications of JFK’s death if we weren’t trying to persuade people who think differently than we do. I’m trying to reach those people and talk to them, communicate with them. To denounce Shenon, an experienced news reporter who has taken on an incredibly slippery subject, is not the way to get that discussion going in 2014.

Shenon to NPR: ‘The destruction of evidence began within hours of the president’s death’ (Oct. 20, 2013)