A local TV newscast showed footage taken by the local ABC affiliate WFAA on that date more than 50 years ago. In the film Dallas police captain Pinky Westbrook can be seen handling a wallet at the scene of Tippit’s murder.  It appears to be the wallet of the accused assassin, Lee Harvey Oswald.

What makes the film footage remarkable is that for 50 years, authorities have said that the wallet was not found until about an hour later when Dallas police detective Paul Bentley removed the wallet from Oswald’s back pocket shortly after taking him into custody at the Texas Theatre, several blocks away from where Tippit was gunned down.

FBI agent Bob Barrett, who was at the scene of Tippit’s murder and is still alive, now calls Paul Bentley’s story “hogwash”.

The wallet is important because its contents connected Oswald to the guns used in the murder of President Kennedy and Officer Tippit.

The WFAA story last fall said that the wallet mystery had been “settled.” Report Jason Whitley interviewed retired FBI analyst Farris Rookstool who conducted an investigation of the two wallet stories. Rookstool concluded that the wallet seen in the 1963 footage is an exact match with the Oswald wallet now at the National Archives in College Park Maryland.

Rookstool shows that the circular snaps, metal strips, and a zipper over the cash compartment are identical in both instances.

Rookstool says the wallet proves that Oswald killed Officer Tippit about 49 minutes after President Kennedy was shot and killed in downtown Dallas a mile and half away.

There’s another possibility: The wallet was planted at the Tippit murder scene.

Who found the wallet? And when did they find it?

Here’s the story insofar as it is known.

The first officer on the Tippit murder scene was Dallas Police Sergeant Kenneth H. Croy, who arrived as the ambulance was picking up Tippit’s body. Croy told an interviewer that an unknown man handed him Oswald’s wallet right after his arrival. The witnesses who preceded Croy at the crime scene were adamant that no one dropped a wallet anywhere in the vicinity.

The wallet wound up in the hands of Captain Pinky Westbrook. FBI agent Bob Barrett recalled that Westbrook turned to him at the scene and asked, ‘You ever heard of a Lee Harvey Oswald?’ I said, ‘No, I never have.’ He said ‘How about an Alek Hidell?’ I said, ‘No. I never have heard of him either,'” Barrett explained.

“Why would they be asking me questions about Oswald and Hidell if it wasn’t in that wallet?”

Why does the wallet matter?

The wallet contained what is the only known instance of Oswald carrying identification under the alias of “Alek Hidell.” The two sets of identification cards found in the wallet are key evidence in the JFK case.

Kennedy was killed on Friday Nov. 22. By the next day, it was worldwide news that the rifle that was used in the shooting of President Kennedy was purchased by mail order with a postal money order made out by “A. Hidell” and listing Oswald’s PO box as the place for pick-up.

Oswald and “Hidell” were now tied by the rifle and the wallet to JFK’s murder, less than two hours after the event.

“Why would they be asking me questions about Oswald and Hidell if it wasn’t in that wallet?”

In custody, Oswald denied that he was the owner of the rifle found at the Texas School Book Depository where he worked and where several people saw one and possibly two gunmen. The gun had been ordered in the name of “Hiddel.”

For the FBI man, Barrett said the wallet made the case against Oswald a “slam dunk.”

Yet the Dallas authorities never wrote a report about any wallet found at the Tippit murder scene. Perhaps that was oversight. Perhaps not.

After 50 years, an FBI agent on the scene believes that the Dallas officer who brought Oswald to the police station is lying about finding the wallet in Oswald’s possession.

Barrett attacked Bentley’s claim that he found Oswald’s wallet for the first time in a WFAA news story last November. “They said they took the wallet out of his pocket in the car? That’s so much hogwash. That wallet was in (Captain) Westbrook’s hand.”

Why did Barrett wait 50 years to accuse Bentley of lying and obstruction of justice?

It was not a fight he cared to pick. Bentley had been Dallas’s chief polygraph examiner during 1963. It would have been professionally hazardous for Barrett to challenge Bentley before his death in 2008.

So what does the story of the wallet tell us?

It was not public knowledge that Oswald’s wallet was found at the Tippit murder scene until 1996. FBI agent Jim Hosty, who had responsibility for watching Oswald, wrote that a wallet containing identification for both Oswald and “Alek Hidell” was found near a pool of blood. Again, no witness ever saw the wallet on the ground.  A second witness, patrolman Leonard Jez, told a conference in 1999 that the wallet was identified at the murder scene as belonging to Oswald.

Rookstool told WFAA that the testimony of Barrett and Croy, Tippit’s billfold, and the WFAA film prove that Oswald’s wallet was at the scene of the policeman’s murder.

Rookstool’s finding is contested by researcher Dale Myers. On his website, Myers argues that the wallet seen on the videotape is thinner and has a straight flap rather than the rounded flap of the arrest wallet.  Whether Myers’s contention is correct or not, Myers has also spent years publicizing Barrett’s story that the wallet at the murder scene contained identification for both Lee Harvey Oswald and Alek Hidell.

The best evidence indicates that an unknown person brought Lee Harvey Oswald’s wallet to the scene of Tippit’s murder. 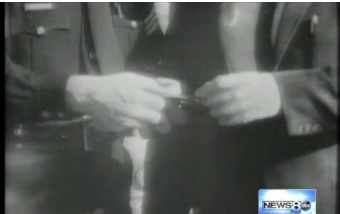 MORE: See Joseph McBride’s book Into the Nightmare and my own research in Chapters 6-7 of State Secret.