“In time I will be able to show you that this is not my picture, but I don’t want to answer any more questions …. I will not discuss this photograph [which was used on the cover of the Feb. 21, 1964 Life magazine] without advice of an attorney …. There was another rifle in the building. I have seen it. Warren Caster had two rifles, a 30.06 Mauser and a .22 for his son …. That picture is not mine, but the face is mine.” 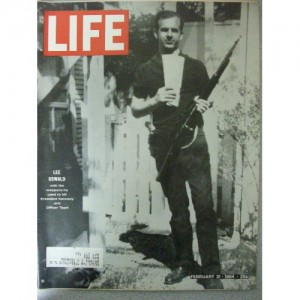 “The picture has been made by superimposing my face. The other part of the picture is not me at all, and I have never seen this picture before. I understand photography real well, and that, in time, I will be able to show you that is not my picture and that it has been made by someone else …. It was entirely possible that the Police Dept. has superimposed this part of the photograph over the body of someone else ….”

Oswald’s denial was picked up by skeptics of the Warren Commission report as evidence Oswald had been framed.

Two experts enlisted by the House Select Committee on Assassinations later examined the photographs and concluded they had not been faked.

Hani Farid of the Computer Science at Dartmouth analyzed the photos in 2009 and reached the same conclusion: they were not faked.

The origins of the photographs

Two versions of the photograph had been found in a box of personal effects in Oswald’s home in Dallas on November 23, 1963. According to the Dallas Police Department, the box contained two negatives. One of the negatives disappeared was never accounted for.

The photo became known  as “the backyard photograph” because it was taken in the backyard of Oswald’s house in New Orleans in March or April 1963. Marina Oswald testified to the Warren Commission that she had taken the photographs.

Another copy of the photograph surfaced in the possession of Oswald’s friend George de Mohrenschildt.