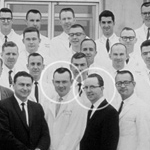 This should be fascinating event.

On Tuesday, the Sixth Floor Museum will hosting “Parkland Hospital: Trauma Room One Reunion,” featuring appearances by two doctors who treated President Kennedy after he was fatally wounded on November 22, 1963.

With the Oct. 4 release of Tom Hanks’ “Parkland,” a motion picture about the hospital where President Kennedy died, the debate about the causes of JFK’s death will be revisited again.

Dr. McClelland disagrees. He has said publicly that his observations of JFK’s wounds convinced him that the president was shot from two different directions and thus was the victim of a conspiracy.

Dr. McClelland is the more senior of the two doctors who will appear at the Sixth Floor Museum event.

In 1963, Dr. McClelland was an instructor in surgery at Parkland Memorial Hospital at the time of the assassination and participated in the treatment of President Kennedy. He  also assisted in the surgery of Governor John Connally and, less than two days later, the treatment of Lee Harvey Oswald.

In 1963, Dr. Jones was Chief Resident of Surgery at Parkland.

McClelland has said publicly that, based on his observations of Kennedy’s head wound, the president was hit by a gunshot from the front, not the rear as JFK’s autopsists  later concluded.

What Dr. McClelland has said

In Part 1 of this YouTube feature, a 2009 radio interview, Dr. McClelland talks about treating President Kennedy after he had been shot, including his neck wound. McClelland says he could not tell if it was an entrance or an exit wound.

In Part 2, McClelland talks about how the Dallas doctors missed the bullet wound in JFK’s back.

In Part 3, Dr. McClelland talks about his thinking regarding the causes of JFK’s assassination. “I’m reasonably comfortable in my own mind that there was a conspiracy,” he says.

Since I cannot be in Dallas on Tuesday, I am looking for someone to write a professionally reported 1,000 word piece about this event for JFK Facts. If you’re interested, please email me here. I will pay for a good story.

Read here for more about “Parkland,” the movie about the hospital where JFK was treate, which will be released on October 4.