Diplomatic historian David Kaiser, the author of a new and well-reviewed book about World War II, took time out from flogging it to respond to John Simkin’s post on JFK’s Cuba policy, CIA looped in on Castro peace feelers.

Kaiser, author of The Road to Dallas, says the argument that JFK was a dove on Cuba is overdrawn. He dismisses the idea that Kennedy’s evolving Cuba policy fatally alienated the CIA.

I think Simkin has the stronger case, but Kaiser, as usual, knows the source material, so his view is well-informed.

“Darrell Zero, in the great movie The Zero Effect, a brilliant adaptation of Sherlock Holmes, once says, ‘If you’re looking for something, you probably won’t find it. But if you’re just looking, you may find something interesting.’

“Sadly, the rule for JFK research often seems to be, if you’re looking for something, it is all that you will see.

“Most of the information provided by John Simkin is accurate. But one implication is wrong, and there is an absolutely critical omission, both designed to promote and preserve the view he is putting forth.

“First of all, there’s no doubt that JFK and the CIA were equally determined, in the second half of 1963, to secure the overthrow of Castro, very possibly involving his assassination. That is documented at length in The Road to Dallas. It wasn’t a conclusion I was delighted to reach, but it was inescapable.

“Secondly, regarding the Bill Attwood initiative, John completely leaves out two key  documents. One is the account of the Special Group meeting of November 5 which discussed Attwood’s initiative.

“The second is a memo by McGeorge Bundy, dated November 12. On that day he had spoken first with the President and then with my dear friend, William Attwood. This is what he said—in comments that also reflect the conclusions of the meeting above.

“‘I talked this afternoon with William Attwood and told him that at the President’s instruction I was conveying this message orally and not by cable. I told him that the President hoped he would get in touch with Vallejo to report that it did not seem practicable to us at this stage to send an American official to Cuba and that we would prefer to begin with a visit by Vallejo to the U.S. where Attwood would be glad to see him and to listen to any messages he might bring from Castro. In particular, we would be interested in knowing whether there was any prospect of important modification in those parts of Castro’s policy which are flatly unacceptable to us: namely, the three points in Ambassador Stevenson’s recent speech1 of which the central elements are

(1) submission to external Communist influence, and
(2) a determined campaign of subversion directed at the rest of the Hemisphere.

“‘Reversals of these policies may or may not be sufficient to produce a change in the policy of the United States, but they are certainly necessary, and without an indication of readiness to move in these directions, it is hard for us to see what could be accomplished by a visit to Cuba. I left it to Attwood how much of this he would convey in the initial message to Vallejo, and I also gave him discretion as to how this message was to be transmitted, with the proviso that it must be clear at all times that we were not supplicants in this matter and that the initiative for exploratory conversations was coming from the Cubans. Attwood indicated to me that he expected Lisa Howard to telephone Vallejo and then probably to get on the line himself to handle the conversation along the lines stated above. Attwood will report the results of this communication and in the event that an arrangement is made for Vallejo to come to New York Attwood will come to Washington to concert a position for his use in this conversation.’ 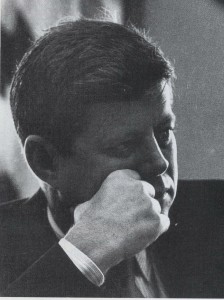 “It is clear, in other words, that there would be no change in relations until Castro had clearly demonstrated changes in his policy, and one sees a general lack of interest in pushing this forward at the highest levels of the Administration. (David Talbot, attempting to make a case similar to John Simkin’s, left these documents out of his book as well.)

“What makes this even more complicated is that on November 12, the very same day, a story broke that seemed to show that Castro had not changed his policy and was still pursuing subversion in the hemisphere: the discovery of the supposed cache of Cuban arms in Venezuela.

“Now, as documented in The Road to Dallas (pp. 296-8), there’s a lot of evidence that this cache was planted by the CIA, based upon discussion at the interdepartmental level about how to generate support for Castro’s overthrow that started in the 1962 Mongoose period but were continuing in 1963. So the U.S. government (including the White House) was simultaneously discussing normalizing relations with Castro if he would stop subversion, and planting false evidence that he was continuing subversion.

“Based on the Special Group meeting of November 5 there was no reason for anyone to expect an imminent change in our relations with Cuba.”