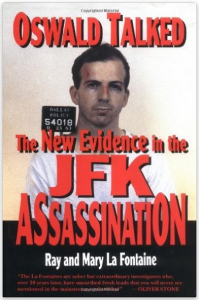 The La Fontaines persuasively debunked “the three tramps” story, which still circulates among  the credulous. The tramps depicted in photographs taken in Dealey Plaza on November 22, 1963 were not CIA men. They did not include Howard Hunt in disguise. They were not henchmen for the lurking Ed Lansdale. They were “tramps,” Ie homeless men. Mary found their arrest records and then, amazing enough, tracked them down.

The La Fontaines illuminated the case of Frank Ellsworth, the ATF agent who was investigating illicit arms deals in Dallas in 1963, particularly involving the DRE.  They pointed out the DRE was in Dallas in October 1963 seeking to buy weapons from the only man in the Dallas area who sold Mannlicher Carcano ammunition. At the same time, the DRE leaders were telling associates they wanted the weapons for an invasion of Cuba that they said would take place in the third week of November 1963. The brilliant young lawyers of the Warren Commission couldn’t be bothered with this sort of detail from non-FBI sources, and their credibility still suffers because of it.

Unlike many JFK researchers, the La Fontaines actually took care to learn and report about Sylvia Odio beyond her story about see “Leon Oswald” in Dallas. They put the whole Odio family–Silvia and her sister and her father–and their place in the anti-Castro resistance and in the JFK story, In their hands the Sylvia Odio story gained its full resonance.

I was glad that as an assistant editor,  I could help them get an excerpt published in the Washington Post.

I didn’t agree with Mary and Ray about everything in their book but that is the subject of a different post. The best memorial for May is to read Oswald Talked.