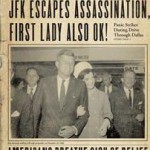 There’s no let up in demand for narratives about the meaning of JFK’s death.

Pundit Jeff Greenfield will answer try to answer the intriguing question What if JFK had lived? in a forthcoming book, according to an Associated Press brief published in today’s Washington Post. Greenfield seems qualified for the task as he was a speechwriter for Sen. Robert Kennedy in the 1960s. He has also served as an on-air analyst for PBS, CNN and ABC.

Narratives about the meaning of JFK’s death come in different forms: Lone gunman narratives that stick to the story few believe — that Kennedy was killed by a nobody for no reason — and conspiracy narratives, in which Kennedy was killed by his enemies for political reasons, with blame most often attributed to opponents of his foreign policy in the national security agencies.

The counterfactual narrative is slightly different in that it focuses on the effects of JFK’s assassination, not its causes.

Based on Greenfield’s previous excursion into counterfactual history, “Then Everything Changed,” I expect him to emphasize the discontinuity between the Kennedy and Johnson presidencies, which would be a welcome corrective to the Halberstam-Dallek historiography which tends to portray the 35th and 36th presidents as like-minded hawks. But I also expect Greenfield will hew to the Official Story narrative of the causes of the assassination. If so, the book could be read as another exercise in journalistic avoidance.

But let’s not prejudge a book by its cover.