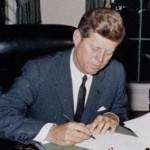 On Monday morning, January 14, President John F. Kennedy woke up prepared to give his third State of the Union address on Capitol Hill. He would never give another.

The past few days had been spent in intense preparation. JFK had shaped the address to focus on managing the Western coalition arrayed against the Soviet Union while proposing a three-year $10 billion tax cut to sweeten prospects for his liberal agenda on Capitol Hill.

On a Saturday devoted to speech writing and Cuba, JFK’s only break was a luncheon for the Delta Sigma Theta sorority women of Howard University where his agenda was clear. The president urged federal efforts to extend education to poor children. “There is no sense is having wide boulevards and beautiful buildings,” he said of the booming capital city, “if the children who live in this city do not have an opportunity to develop their talents.”

Kennedy had also met with advisers on Saturday to talk about the CIA’s continuing aerial surveillance of Cuba but he did not plan to raise the issue of Cuba in his State of the Union address. Conservative critics were saying what most generals at the Pentagon privately believed: that JFK should order an invasion of the island to get rid of Fidel Castro, something that the president had refused to do during the exiles’ abortive Bay of Pigs invasion in 1961 and again in the missile crisis of October 1962. For JFK, a land war in Cuba was not a priority.

Nonetheless, in Havana Cuban president Fidel Castro was insisting the missile crisis was not over.

“For us, the Caribbean crisis has not been resolved,” the Cuban leader declared in a lengthy televised speech. “A war was avoided but the peace was not won.” Regarding a U.S. non-invasion guarantee, Castro said, “We don’t believe in Kennedy’s words. Kennedy  has given no pledge [not to invade the island] and if he did give it he has already withdrawn it.”

In Miami, the embittered Cuban exile colony was haunted by the opposite fear: that President Kennedy had made–and intended to keep–a secret pledge to Castro not to invade. The White House, some alleged, was pursuing a policy of “co-existence” with Marxist-Leninist tyranny.

On Sunday he and Jackie had braved raw weather to attend a Sunday mass in the Virginia countryside The First Couple drove through dense fog to attend services in Middleburg, Virginia. It was so windy and wet JFK wore a topcoat—something he was loathe to do. The Kennedys then took their kids, Caroline and John, to look at a property on nearby Rattlesnake Mountain where the family was building a summer home.

Vice President Lyndon Johnson was at home in Georgetown planning to attend the State of the Union address and then fly to Austin to attend an inaugural dinner for his friend, Texas governor John Connally.

In Dallas, Lee Oswald went to his job at the Jaggers-Chiles Stover graphic arts company with a plan to enroll in a typing class after work.